The excavations show usage of Ochre Colored Pottery in Northern India during the times of 1900-1200 BCE. These were less artistic and fine compared to the sophisticated IVC culture which used burnished, smooth surfaced, polished ware pottery.

However from around 1200-600 BCE, excavations show the Vedic people as belonging to the PGW (Painted Gray Ware) culture. The Rig Vedic sites have PGW but iron objects are absent. Hence it is considered a pre-iron phase of PGW. On the other hand, the Later Vedic sites are considered iron-phase of PGW. 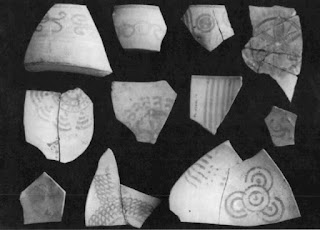 This has led to historians and scholars to place the dating of Mahabharata at around the time of 600-1000 BCE. Also most likely the war did not happen in early vedic times since Iron was not found. It had to happen in the Iron age given the weaponry used, chariots used etc. All these points towards late vedic age as time of the war. Though it is never easy to give an exact date, it is now more or less agreed that the war happened sometime in 600-1000 BCE time period.

What can be understood with reasonable probability are

1. It could not have happened before or during OCP times (before 1900 or in 1900-1200 BCE) simply because only two of the major Mahabharata sites gives any proof of well settled life in the OCP layer excavations. Also bronze age could not have produced the types of weapons and janapadas with their own kings systems as explained in Mahabharata. 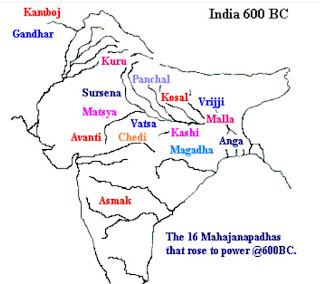 2. Mahabharata tells about many Janapadas (anga, vanga, kosalam, avanti, gandharam,kalingam, chedi, panchalam) which joined either the Pandavas or the Kauravas faction. Could not have happened before 1000 BCE. (No janapadas originated before this time). 12 of the 16 Janapadas participated in the Mahabharata. (These Janapadas originates around 1000-800 BCE, stabilizing by 600 BCE) . Good samples and proofs of iron, agri wares, weapons / arrow heads in PGW layers across many of these.


3. By 600 BCE Magadha emerges as the main Mahajanadapa - and one of the first large states of India. However, Magadha has no special mention in times of Mahabharata. Hence it could not have happened after 600 BC.


It is worth noting that some historians / astrologers have, based on star signs mentioned in Mahabharata and understanding of Yugas in Indian mythology have put the date of Mahabharata as sometime around 3000-3100 BCE. It's now almost widely accepted that this is impossible given that even IVC hadn't matured, even Rigveda was not written and Iron age was still many centuries away. Hence a sophisticated war like Mahabharata which involved widely spread Mahajanapadas (even as far eastern as Anga - which was gifted by Duryodhana to Karna) could not have happened so early in India history. Aryans come east into the Gangetic plains after Rig veda was composed which itself is around 1700-1500 BCE. Hence it is impossible for Mahabharata to have happened in 3000 BCE.