Eyes that used to throw furtive glances at the sky in anticipation can rest...Monsoon has finally come to Mumbai shores ! Rains bring in plethora of memories - all sewn up across time lines.
Rain drops on through the windows as you wake up. The smell of sweet earth emanating from the moist cool breeze. Pigeons resting at the windows safe from the deluge. Slightly soggy newspapers. The sound of viper making swoosh noise at the car. Foggy windows at Grandma's mansion where paper boats were initiated on a endless journeys. New school uniforms for June reopen which soon gets messy and wet in the school bus. 3 a.m walk to canteen at IIM A in knee length water to have hot coffee. Trekking in the rainforests of Kerala with leeches all over as an 8th standard student part of WWF camps. Splashing of water drops on the historical facades of Angkor watt temples. Water bellowing through the grand roots of the trees which has eaten Ta Prohm temples. Kerala and her sex appeal. Fishermen going into deep seas with cloudy horizons in Kochi. Slushy peace of a small rural temple in Kerala where rain drops fight with the oil lamps. Dazzle of thunder all around as you hold onto fixtures in a storm inside a pipe laying barge with huge waves all around you. The rage of seas along with rains beating my small seaside cabin in Tanzania to pulp in a span of 2 hours. Coldest of rains and hailstorm in Alps while trekking in Austria. Waking up on a Sunday afternoon to have Sandy's masala chai and roadside bhujiya. Gulping buckets of Beer at Seaview, Juhu before walkign to PVR to watch random movies or lying down at the chowpatty with waves and rains drops beating you down. Going from Juhu to Borivali in double decker bus sitting in the front seat at "top floor" with front windows opened. Cheapest Brandy mixed with water from Canteen and lemon pickle to go along as a poor Mechanical engineering student. Driving my Pajero over unforgiving terrains in Africa with visibility close to nil due to the watersheets falling from heaven. Sitting with my Gujarati pilot born and bought up in Nairobi flying in a Cessna over Arusha forests/river in a storm and his profoundly comforting words," Dont worry, I won't crash land. Why ? Cause death from a mid air crash would be so much more peaceful than by those crocs down below!" 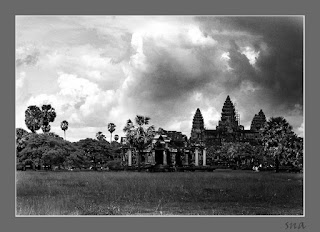 Angkor Watt with clouds gathering before a deluge !! (Taken in 2008 while on a Steve McCurry inspired trip to Cambodia, taken with Canon 40D, Tamaron 28-75 f2.8, Manfrotto support, worked in PS CS3)
Posted by Suhas Anand at 1:32 AM No comments: