Ranthambhore - that little tiger habitat amidst fort ruins in Rajasthan's Sawai Madhopur has been in my dreams for the last 3 years. The last time I had gone there was in 2006 and I had not seen even a single tiger back then. 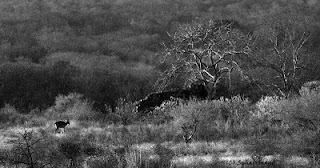 This Republic day weekend (Taking leave on Monday) me and missus were planning a relaxed drive away to Goa for sun, sand and buckets full of beer. The idea was to leverage some "army" connection to get to a beach no open to junta. Since it fell through we ditched Goa. Just another Goa trip did not sound like fun.
So Friday night, 22nd of January she flew down to a fogy IGI airport in Delhi. I picked her up and took a train from Delhi to Sawai Madhopur after arrangin stay at ITC Welcome Heritage through Junglelore.
We were quite apprehensive of the trip given the extreme fog, lack of Gypsy booking and not staying with Ranthambhore photo experts like Aditya Singh, a friend from INW. We were cursing ourselves for not planning this better. Finally we decided we will just go and enjoy the forest not worrying about photography.

Rated as a "good" zone, we were off in a Gypsy (Thankfully could manage one last minute) accompanied by two Brit couples. Nothing major happened other than the usual suspects like CSE, Wild boars, Sambars, Cheetals and Nilgai. It was quite chilly during the evening drive and it forced us to deck up in all winter finery for the morning on Sunday
Oh yea, some normal forest / land birds too for the camera !! 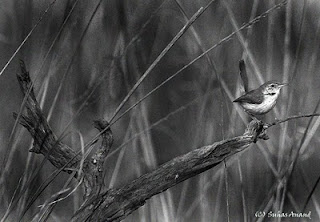 Again Zone 4, said our lady luck. And we were reasonably pessimistic. TO top it we were in a canter with 16 odd folks. Thankfully not daily tourists decked in red sarees with cry babies throwing plastic biscuit wrappers all around the park - atleast helped my blood pressure as well as avoided fighting with them ! Was driven by one of the most experienced drivers around, Raees Bhai. He soon became my favorite driver - almost as good as Ive seen in other national parks.
Nothing happened till about 9 a.m. Did see some forest birds blah blah. Just when people were settling back for the drive back out of the park, the guide shouted "Tiger Tiger". And there she was. Some where down on the right side close to a water hole was Machali. (We had a long debate on her identity and finally the guide and driver said it's indeed the legendary Machali). Machali was recently conferred the Life time achievement award by BBC and rated as the most photographed / videographed tiger in wild along with B2 of Bandavgarh. I had B2 in my last Bandavgarh trip and adding Machali was indeed a nice bonus.
Had 10-12 good shots of her flehmen response, scent marking the territory and generally moving around the grassy landpatches. Angles were tough, a big challenge of shooting in Canter. So was light. Since unlike in a Gypsy I cant ask the driver to move around the big canter with ease for best lighting. Whenever the light was good, it was divine. The winter light in Ranthambhore is stuff of dreams for Photographer. 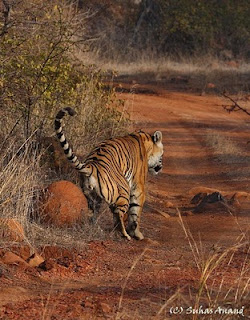 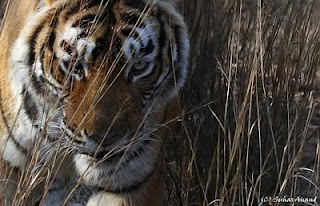 The usual..nothing exemplary but for the great scapes and fort ruins across Rajbaug lake, Padam talab. Also could shoot Sambars in water, few water birds, bar headed geese, pied avocet, brahminy ducks etc. But the real essence of Ranthambhore in a way is in Zone 3. Majestic is the only word that comes to mind. 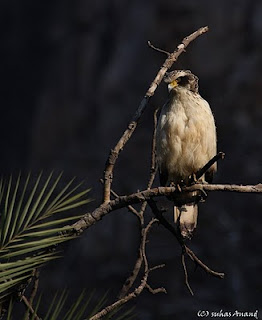 Went back to the hotel. Rested a bit around the pool and went to meet Aditya dicky singh. Had a great time at Ranthambhore bag with him, his wife and couple of friends from INW. Had dinner around a good fire to ward off the biting cold. We were quite jealous about his charming life so close to the tigers that he loves so much. We then took a walk back to the hotel in the moonlight with the forest right beside and the sounds of forests in our ears. There was flowing Rajasthani folk songs wafting from some faraway hotel. Was a great day that ended all too soon !!

Day 3- Morning - Zone 3
Zone 3 again. Again waited close to the lake for a tigress who had made a Sambar kill a day back to appear to drink water. 3 hours wait and nothing happened. Go back to the hotel. Had lunch. Downloaded pics. Charged batteries. Removed winter attire and got into something more lighter. By 2.30 was ready for the second safari

Day 3 - Evening - Zone 3 !!
Ok..Now this was becoming all too familiar. Off we went again to Zone 3. Shot the brahminy ducks and pied avocets at Padam Talab and scapes of Sambars eating at Rajbaug lake. ALso couple of cute little mugger crocs. Waited for couple of hours close to the lake for the tigress to appear at water. Again nothing happened. We had invested a total of close to 10 hours for her to appear. Shot vultures, white brested drongo, treepies, partridges and prinias in the meantime. Drove back with a rather heavy heart.

Aditya had told us Zone 1, was the most underrated zones of Ranthambhore with most tourists not liking Zone 1. Though it had leopards with cubs, bear with cubs and 2-3 potential tiger opportunities including T 38 male. Since it was very dense sighting would be tough unless on the road. The forest in Zone 1 is lovely, giving feel of a pench or tadoba for some reason. Shot a spotted owlet which was pretty cute. Nothing happening other than that. 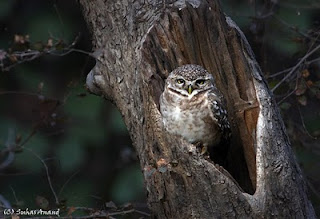 By around 9 there were alarm calls from a Sambar. Waited at a point close to the end point go Zone 1 for some movement. After 15 minutes we decided to go further up and there she was. A beautiful shy young female tigress in all the glory. THought light was still not super good, we got some head on shots. Got atleast one eye level shot when I got down to the canter steps , hunkered down as low as possible and waited for her to come into the view finder. 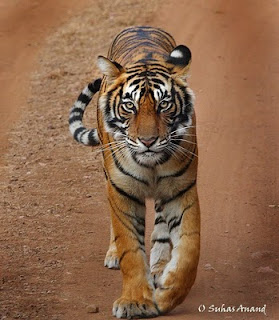 All too soon the trip was over....Two sightings, 2 GB worth of pics and some nice evenings lying on hammocks listening to Rajasthani folk songs in the cold weather. Was also great catching up with Dicky and getting some connects with guides and good drivers like Raees bhai. Might plan a return in April. Sighting will be better but I guess I wont get the winter light. That is only if Im not going to Bandavgarh !! ;) 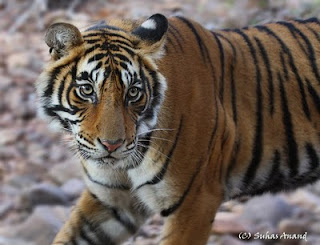