As we were wondering where to take Aarav for his first proper vacation, I suggested Kruger (Surprise, surprise). Sandhya vetoed the idea saying 1 year and a bit is probably a bit too early for him to be camping with us in the bushes of Africa. Since neither of us wanted to vacation in a city, we finally agreed on the Scottish Highlands where neither of us had ever been. We also decided to use London as a stopover to meet some friends and relatives and then take train to Edinburgh.

And thus turned out a memorable Summer in UK - with rains of course !

The BA flight from DXB to LHR started of in a mini disaster with no AC functioning and held on bay without taxing for couple of hours. Aarav did not take too kindly to it and cried his heart out ! As someone who always got irritated with kids in flights crying, I think I got my reasons to be more understanding next time that happens ! Once the flight took off, all was well.

My school pal Sachit came to pick us up at LHR and drove to his well appointed home in Watford. Relaxed a day roaming the nearby parks and stocking up on baby food and nappies for the highland trip. (Normally I would be more worried about tripod tighteners, CF card speeds, standby batteries, filters etc - how times change !)

Next day early took our train from Kings Cross to Edinburgh. Got the little family seating with the mini table in middle so that Aarav could be reigned in without any major damage to properties. Between making sure he did not kick or otherwise harm the fourth passenger and playing Uno we reached Edinburgh.

After checking into the Sheraton Hotel and Spa with an enviable view of the famous Castle, we decided to walk around at the foothills of the castle. Covered the Parish Church of St Cuthbert at the Lothian road and 5 minute walk from Sheraton.
Took a few shots of the castle in night, fire works and late night streets of Edinburgh

Next day was dedicated to Calton hill (probably the best place from a photography point of view) and then in afternoon relaxing in the amazing Princess Garden. I can imagine it being a lovely place outside of the peak tourist season of July-August. Even with all the lavish crowd it still felt good to walk amongst the huge trees and gulls and squirrels.


Many of the paintings of city is of or from the Hill. It has the National Monument (almost Roman in its edifice), Dugald Stewart monument (the centrepiece of above photograph) and the Nelson Monument.

The national monument is a war memorial for the Scotts who fought Napoleonic wars. Funnily enough it was not fully constructed due to paucity of funds and hence some call it the Disgrace of Scotland. For me though, due to its very nature of feeling of incompleteness it almost gives a dejavu of a bygone Roman era - something which fell apart under the hardships of time rather than one that never was !

Princess garden was as usual for a summer day without rains, full of people - both from the city and outside, thronging the lungs of Edinburgh taking a break from the multitudes of festivals and shows in the city.


Early next day, we took our car booked with Avis and went up the highlands leaving the city and the crowds behind. This is when the vacation really started - fresh air, cool wind, green mountains, fresh water lakes and a welcome respite from thronging human populace. Miles and miles of serene land without many people was indeed a welcome break especially since I had spent the first part of my vacation in India !

We used a B&B in Argyll, very close to Kilchurn castle at Dalmally village as our base. The drive to Dalmally through the Loch Lomond & Trossachs national park and forest was one of my most memorable.
Enroute we took a break to have a few sandwiches and tea in the cool weather, sitting idly next to Loch Lomond. Aarav was super thrilled to be let to play in dirt, stones and the cold water !
After reaching our B&B, we trekked to the Kilchurn castle and took some interesting shots. Also let Aarav go on his first trail walk :) 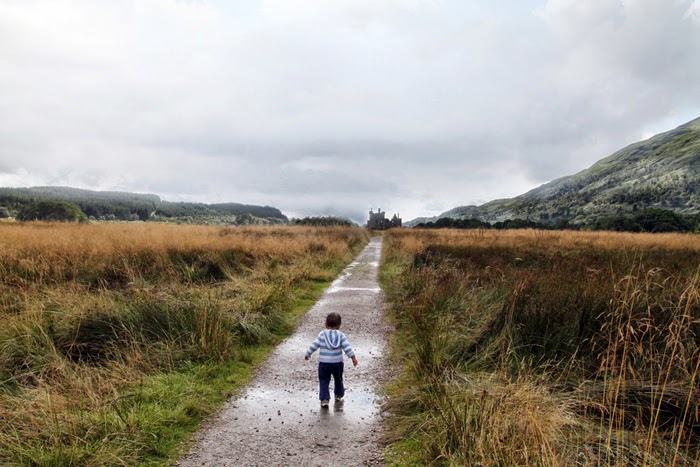 The remainder of the time in Scotland was excitingly similar : drive, stop, shoot, relax, drive ! Such pure bliss.

We were both sad to leave Scottish highlands and go back to the bustle of London. However, as one final heavenly drive, we took the Glen Orchy route to Sterling and then connecting on to the highway to Edinburgh. This was suggested by the housekeeper at the B&B and we could not be more thankful to her for the suggestion (Rebecca from Craig Villa). It was a single lane route but with enough parking / passing bays.

After visiting Doune castle and some other memorials at Sterling we hit Edinburgh. Back in London met with my schoolmates Sachit and Girish and had a rollicking time with lot of good ol ales.
Did a quick deviation to Essex to meet up with a cousin at Southend on Sea to see the largest pleasure pier of the world.
This was followed by the cursory central London stay for a couple of days. This time I chose the Sheraton Park Lane close to the Greenpark Tube station and walking distance from most areas that Sandy wanted to visit including St James Park, Palace, Picaddilly, Leicester square and Hyde Park. After the usual touristy things including the London eye, Big ben etc it was back to Dubai ! Central London, especially South Bank looks the worst I ever remember. New glass facade buildings allowed next to traditional Gothic architecture coupled with loads and loads of people kind of balanced out a good weather with reasonably sunny days.
The highpoint clearly was time spent with friends and the amazing Scottish highlands. Next time I will most likely fly direct to Edinburg and fly out from Aberdeen covering the middle ground driving on road. That would be an awesome vacation - a road trip of a lifetime ! Well nothing to beat Kruger, but still....