Day 0: Vienna and flights !!
Our Austrian air flight from Dubai on 20th night (of a blistering hot July in Dubai) had a connection at Vienna. The connection did not work due to technical issues which meant we lost one evening in Rome. By the time we landed, it was already night and we immediately took a cab to Sheraton Roma our first port of call. Idea of choosing the Sheraton was (apart from being relatively cheaper) was that they had shuttle services right to the center of historical Rome.

Took the early morning shuttle from the Sheraton to historical Roman center; The 8 am bus dropped us outside the Campidoglio – the famous piazza designed by Michelangelo. 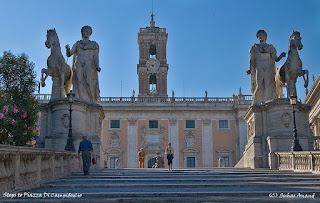 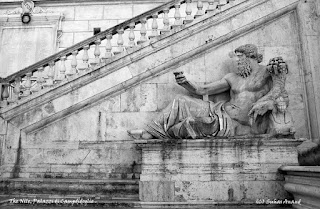 Light was harsh and there was no point in doing too much shooting. Just enjoyed sitting by and watching Rome pass by in the shades of some amazing work.
Latter on decided to walk around enjoying the sights of Rome – first was Monumento a vittorio emmanuel 2, followed by a walk to Colesseum past the Roman ruins. 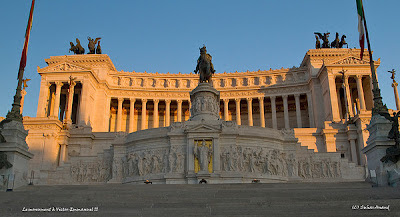 It’s a feeling of awe and of stepping back and thinking about what was once a glorious city. How would have he Romans lived in the midst of all the wealth and grandeur (especially after reading the rate for Italian government bonds shooting up in the financial papers in the morning!!)
After lunch in a nice Italian pizza place, used the Colosseum ticket (combined with both roman forum and palatino) to get into the world famous structure. You can feel what the gladiators felt as they probably walked into the centre cheered on by the massive crowds around. 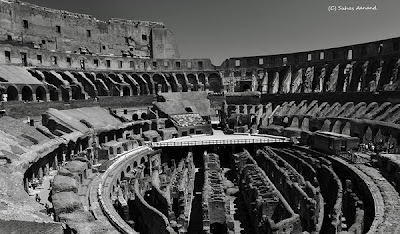 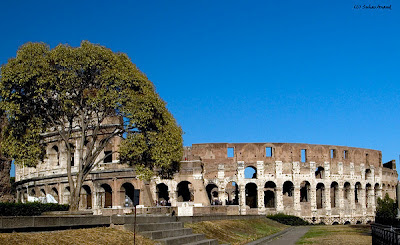 Once sunset was approaching walked over to the Roman forum clicking palatino, temple of Saturn & Mars, Venus, Arco di tito, Arco di constantino along with colosseum in lights. 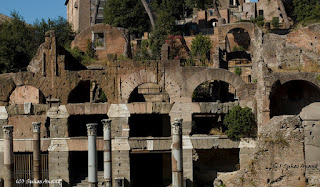 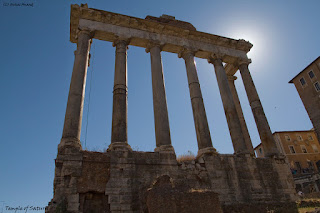 Also took a short walk by the river (Fiume Tevere) across which would be our next major plan - the Vatican city. Had dinner in the same place that we had lunch since the pizza was really terrific and draught was nicely chilled. (Which helped when outside temperature was in high 30s)
On the way back to where the hotel would pick us up,  stopped at Campidoglio, took night time snaps of the piazza , Foro traiano (along with Mercati Trianei and colonna traiana), Emmanuelle 2. Also took some light trail shots of Theatro Marcello opposite Campidoglio.

Day 2 : Rome
Day 2 was dedicated to  along with some more key monuments on the way from roman centre to . We decided to walk from Rome to Vatican since most of the important monuments we wanted to see was scattered along the way.
From Campidoglio, walked through the Via del corso to Fontana Di Trevi (coin throwing fountain!!!). Once done with shooting there moved over to Palazzo Chigi on the way to the Pantheon. Spend sometime inside the Pantheon which almost felt super air conditioned inside given the stone construction and air flow. Post Pantheon moved on to Piazza Navona.
Had lunch to break the long walk from a roadside pizzeria close to Navona. After lunch, walked at the riverside from Ponte Umberto all the way to Ponte St Angelo from where shot some great shots of St Peter’s Basilica as well as Castel St Angelo. 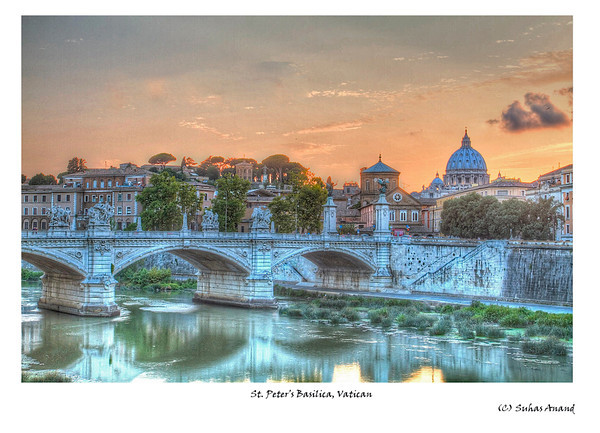 Walked into  after that to stand in the long queue for entrance. Had a great time shooting the terrific lights inside the basilica – worth the 1.5 hrs spent in queue in searing Italian heat. 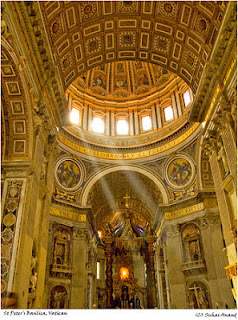 ntings as well as doing multiple natural light shots (no tripods or flash allowed inside). Gave me a chance to try my new 50 prime (1.8, ver II). Unfortunately, we were so engrossed in the basilica that we ran out of time to get into the Sistine chapel. (Noted for next time’s visit) 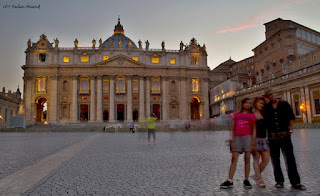 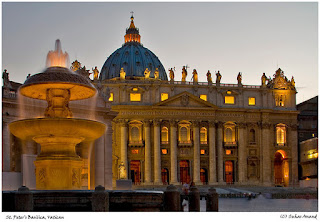 We spent close to 2 hours just enjoying the interplay of light, shadows and fantastic pai

On the way back to Campidoglio, had dinner at a riverside restaurant. Tasty and well-priced Gelato was always a time tested way to finish a meal at Rome. We traced the same path back to centre of Rome taking some night shots of the Fontana di trevi, piazza navona as well as Pantheon. 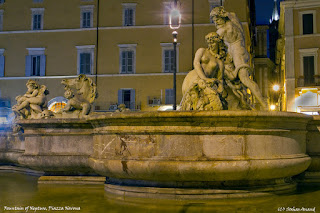 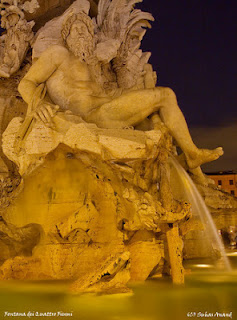 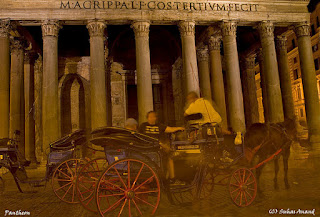 Spend a while browsing the lovely drawings of artists at the Navona. Sandy bought a couple of lovely paintings to take back as memoir.

Took the hotel shuttle early in the morning to EUR magliana (metro stop closest to Sheraton). From Magliana took a metro to Roma Termini. From Termini train took us to  station, from where a Taxi took us to the Sheraton Firenze which was in a nice Tuscan hillside away from the City. Took a nap before taking hotel shuttle to City centre.
Got down close to the Piazzo St Marco. From there walked over to the St Maria Del Fiore housing the world famous Dome. Since all chapels and towers were shut for the day took a few shots in and around the place in fading light which provides a glow to  that is memorable. Had some Italian fare for Dinner in a small roadside café across from Piazza di St. Giovanni behind the Del Fiore.
Went to shoot the Piazza SS Anunziata in lights (close to the leather market) post which went back to the Hotel through the inviting  landscape.

Today we planned to go to . Just for ticking it off since it’s indeed a world wonders. I also wanted to read up on the construction and engineering behind the original construction as well as the subsequent renovations.
Half a day spent in  was worth it though we got mugged by a family. Unfortunately for me, the only thing that they could run away with was the sachet of my Lee GND filter assuming it was ’s wallet. The filter had to go into the front pocket of my Photography vest from then on with a real risk of getting broken. Thankfully, the quality of Lee stood us well.
Got back to  by evening and went up the 450 odd steps to Dome to shoot the  skyline. Was phenomenal to say the least.
Climbed down the 450 odd steps and decided to go up the , another 300 odd steps. It was a real test of both our fitness and determination. A total of around 1500 steps in 2 hours almost killed us. However, we had to do it since we did not want to lose the chance of shooting the setting sun from both the settings. The end product of the work was worth it. 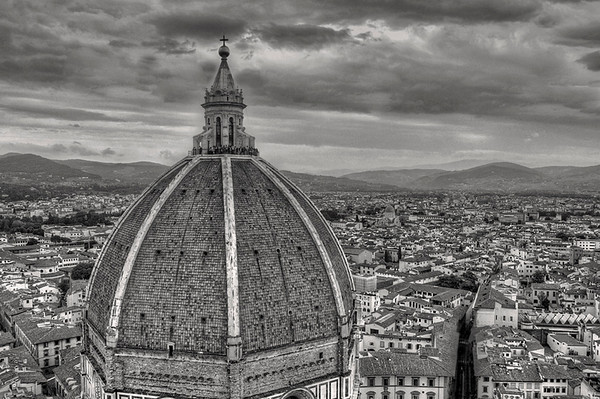 We rested for a while to get breaths back and then moved to Galleria D Uffizi where works/replicas of masters are displayed along with many artists painting below in the galleries (Including the Michaelangelo’s famous David’s replica)
Got a Pakistani dinner place to take a break from the Pizzas and Risottos. After having some Indian food went off for a happy sleep back at Hotel.


Day 5 :
After living in Tuscan hills for couple of days, we shifted to Westin Firenze right in the city centre and bang at the  river side. It did live up to the expectations of being one of the top rated hotels in the world. We got a room with a balcony overlooking Arno river and was one of the most romantic settings to spend an evening or early morning – listening to live music by solo musicians, with artists painting across the Ponte Vecchio bridge and brilliant sculptures and domes punctuating the historical city skyline. (Ponte Vecchio is one of the oldest bridges full of goldsmiths from bygone eras) 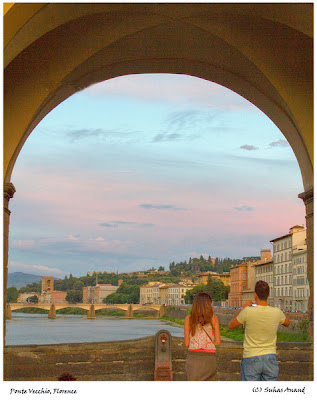 After lunch, we decided to go see work of Michelangelo (especially the world famous David); when we saw the queue was around 3-4 hour long I quit to go and get some sleep. Sandhya favored David to sleep and had a great time enjoying the art. We met at Westin in the evening and hiked to Piazzale Michelangelo.  It gives a scintillating view of the  skyline after a trek up a hill (easy trek over Asphalt roads – so everyone can do it). 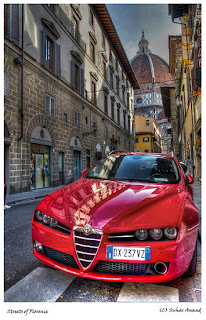 Spend 4-5 hours just enjoying the atmosphere, shooting the sunset, listening to live music, watching masterful spray painters at work and in general immersing in the wonder that  is. 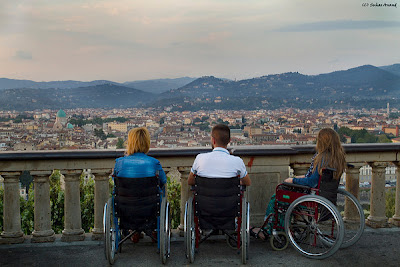 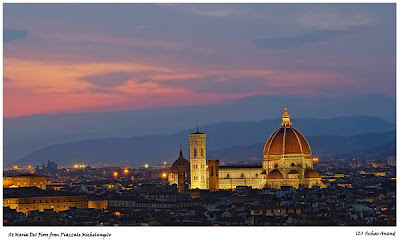 Also finally took shots of the Santa Maria Novella which gives the main station in  it’s name.
Clearly, in 3 days  became one of our most beloved cities – a terrific combination of music, art, cuisine, history as well as dream shots from a photographers point of view.
Next day we would check out of the fantastic hotel to take our train to  wondering if  can match  in the romanticism. 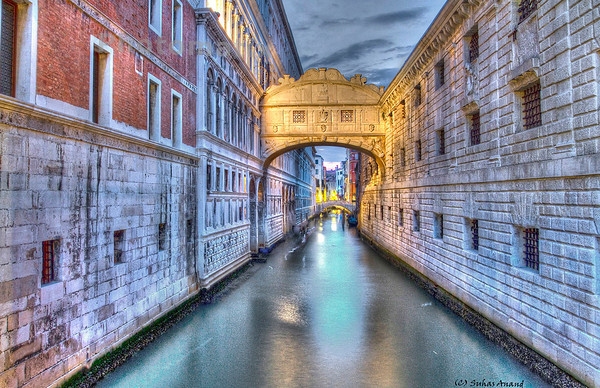 Took our train from Firenze Santa Maria Novella to Venice St Lucia station. Stepping out of the train station in  itself is an unforgettable experience. You walk through the usual menagerie of tourists, briefcases, vending machines, shops and step out to see the majestic grand canal with Vaporettos taking people and tourists to their end destinations. In the back ground is St Simeon Piscolo church looming over the everyday  scene.
Took a water bus to San Marco (which was where our Hotel Westin Europa and  was located). Didn’t know there were two . Hence took a grand canal tour and reached the wrong San Marco. Took another Vaporetto back to the real San Marco and checked into the hotel right in the middle of  and walking distance from St Mark’s Square and most other attractions.
Waited for the light to become a bit softer. At around 6 p.m shot around Piazza San Marco shooting the tethered Gondolas dancing in the waves with slow shutter speed 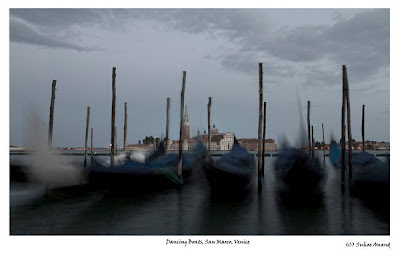 .Then decided to go up the Campanile to get city scapes of .
Unlike, , there was a lift to take you up helping us avoid the 1000 step hike. After getting some stunning  scapes including Basilica Di San Marco, , Doge’s Palace and some top down views of St Mark’s Square including an interesting placement of chairs in one of the cafes. 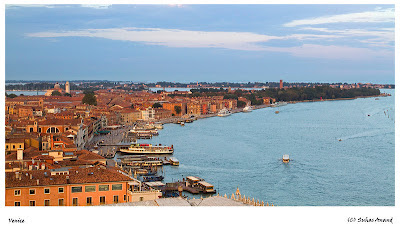 Decided to walk to Ponte Rialto close to the famous  market. Found a nice café just below the  bridge to have a Venetian dinner with Italian wine.
Decided to call it a day to get some rest at midnight for a planned early morning sunrise shoot.
Day 7 :
Missed  and slept till 7am. Sunrises usually are best at around 4-5 am during summers and hence was difficult to do after late night shoots.
Decided to spend morning walking to Gallerie Dell’ Academia. On the way shot some Venetian masks and bought one as a nice souvenir. There are some lovely views of  to be had from the Ponte Dell Academia. After spending sometime there had lunch at a roadside café. 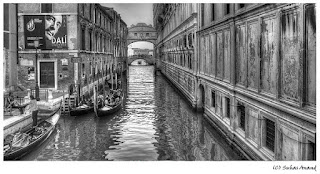 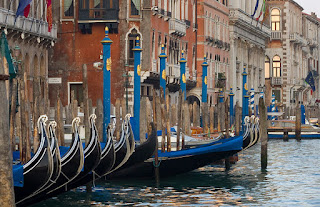 We had to try the Traghettos – famous point to point gondolas of  (these are basically gondolas stripped of all it’s fineries and transporting tourists and well as venetians across grand canal for half a euro). Took one across  from Santa Maria Del Giglio to Salute.
Walked over to cheisa della salute from the Traghetto stop and sat around looking at Venice going through her day. Lazily sitting at the steps and enjoying the throng of water traffic and gondolas with tourists flitting about is an experience unlike any other. 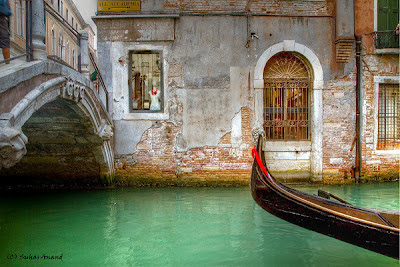 In the evening walked to the Punta Dogana next to Della Salute which opens into the seas and is the edge of  looking over .
For the night took a long waterside walk to Ponte Lungo doing some street shooting, looking at all the cruise ships lined up in the shore and having gelatos.

Posted by Suhas Anand at 9:35 AM No comments: