Many great news from my side :)

As many of you would already know Im going to get married on 28th. It has been quite a busy couple of weeks at work and hence its yet to sink in. Any which way for us both its not as BIGGG yet as for our families ;)...We are more thrilled about the traveling that we get to do after the wedding. Last year around this time I guess we had gone to Alibaug to shoot sunsets, boats and the sea gulls. This time planning to go to Havelock off Port Blair for a week and then latter to the paradise Bandavgarh. People just dont understand why we want to do "honeymoon" at
1. One of the oldest littoral rainforests in India off Andaman coast
2. Amongst dense central Indian sal jungles rated as THE Tiger capital of the world

But for us both it was quite a natural thing. Both of us love nature more than things like city life, great food, amusement parks or other such routine things, both of us love India and have traveled outside enough for it not to be a big novelty. Also where else to go for honeymoon but to Bandavgarh ;)..(Ok ok - that is a bit of exaggeration but still ....)
Our initial plan was to do Kenya or re do Tanzania. But the internal troubles meant that our tour operator advised against it. So we have postponed Kenya for next year.
Hopefully we get some endemics at Andaman and then tigers+other species at B'garh. Only issue is it wont be quite pleasant at 40 degs + on the 4 wheel drives :D.

Im actually looking forward to the whole wedding rituals too...Sad that I can't click my own wedding ;). Taking off from work tomorrow onwards for 25 days. Will keep you gals/guys posted and hopefully can upload a few stirring snaps too from the travels.

NB : 40 D is back in my hand after quite a re haul according to Canon service center. Hope it sticks fine during the travels. Else my only back up is an Fz50 from Panasonic.
Adios for now...Will be back soon as a married man..hehehe
Posted by Suhas Anand at 11:30 PM 5 comments: 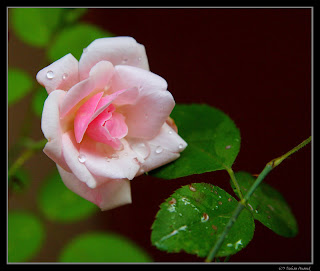 I was in Kerala for 2 days since it was Vishu (New year for Keralites). It is always nice to go to Kerala during spring. (Though this time it was amazingly hot and humid - much worse than Chennai - the place I work out of around 4 days a week).
But the morning and evenings are as amazingly glorious as ever. As the slanting rays of sun falls on new blossoms, you can see myriad small birds hovering to have their share of spring honey. As the grand ol man in the neighboring villa waters his garden, the sweet smell of wet soil mingles with fragrances of the new blossoms. There is a earthen pot behind out garden where water is collected - it becomes the social bathing pond for an amazing number of species - bee eaters, tailor birds, treepies, babblers, robins,golden orioles and red whiskered bulbuls and atleast 2-3 species which I could not identify. 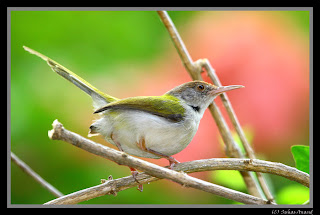 During one of my shooting trips, I followed a black cat in its quest for food. It planned and executed a brilliant attack on an oriental magpie robin. These are times when you realize the precarious nature of life in nature. 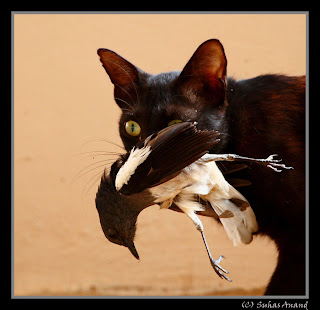 Also met up with old school mates at various stages of marriage - dating, engagement, marriage, wife carrying, child born etc etc. Why do I have a sudden feeling that I've now truly grown old ?!!!!
Posted by Suhas Anand at 6:15 AM 2 comments: