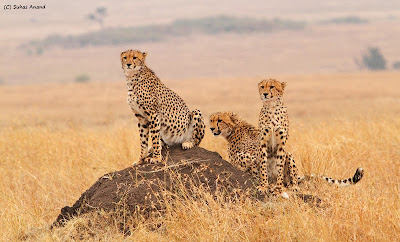 For many of us, one of the most fascinating aspects of this year’s Summer in Mara was tracking down 3 Dumas (Cheetah in Swahili) – 2 brothers and a sister, all of them young, ambitious daredevils. They were super-efficient in hunting with almost a 100% success rate whenever they hunted Tomy’s gazelles. Of course they were bold enough to try the same feat with bigger game like Topi or Warthog and failed. They do remind me of Honey’s boys – 3 brothers who were legendary till one of them was killed potentially by lions in 2011 fall. They used to hunt pretty much as a unit, super successful most of the times and beating success statistics for cheetah hunts time and time again. I hope these 3 stick together a bit more though the sister might move off sometime soon. Even the 2 brothers alone could become a formidable hunting pair by the looks of it.
The most fascinating aspect to see was their planning and formation for hunts – reminding one of large lion prides- in bringing down prey.
As typical of many cheetah hunts, they spot a gazelle or impala from afar typically from an ant / termite mount. 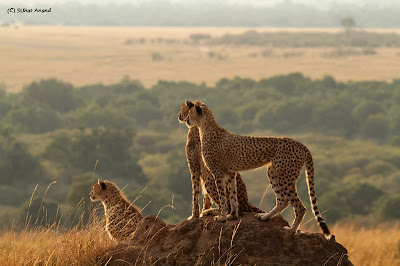 The gang then splits and one of them stalks prey close. 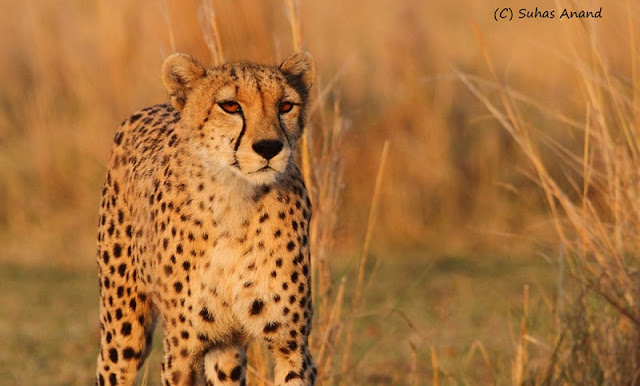 While the others move ahead and flank escape routes. 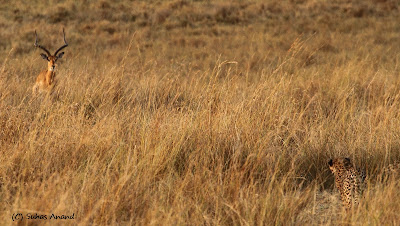 The stalking cheetah then charges the prey.  I felt in group hunts the cheetah stalking charges earlier than I would have expected in a solitary hunt – maybe smug in the knowledge that it is team work and he is not a solitary cheetah hunter. 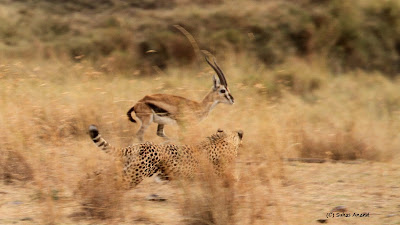 A confident gazelle bets itself to outrun the first attacker given the distance and most of the times it might do so. Alas with the killer machines it only manages to run into their well woven trap. Within seconds, the second hidden cheetah joins the race with fresh legs. 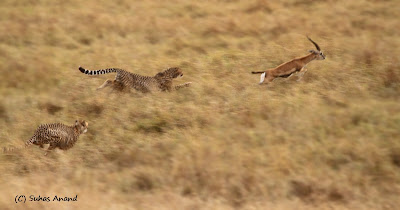 If the gazelle manages to maintain stamina to outrun the second one, it then faces the daunting task of 3rd pair of fresh legs up ahead in its trajectory. You almost feel as if at that point when the third one comes into the frame, the Gazelle gives up its hope. 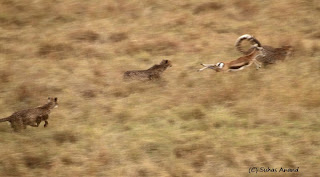 The last seconds of the chase and kill is amongst the most difficult things to shoot in the field even with the latest superfast bodies and lenses. There is speed, there is zig zag motion and there are grass blades which takes focus tracking off the subjects.  Add to it vehicle position, lighting condition, other photographers / movie makers in frame, trees and bushes, and it’s most often than not a mix of extreme luck and some reasonable skill to get shots. During such a chase a cheetah’s legs touches the ground only for ~50% of the time. You can almost see the fear in the eyes of the Gazelle if you ever get a focus lock! 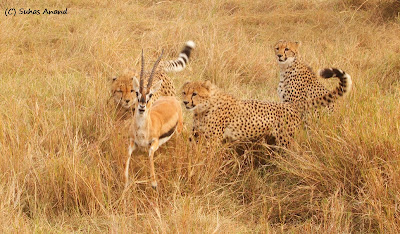 In the final moments, the cheetah trips the prey even while in full speed of close to 60-70 mph. 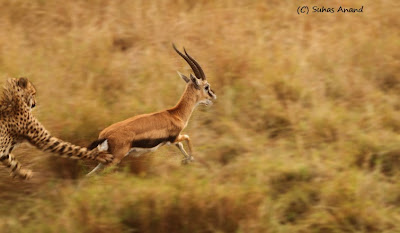 Once the prey is on the ground, the cheetah home in to get a strong hold on its windpipe suffocating it to death. 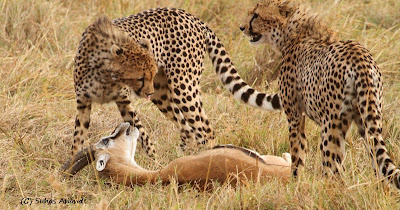 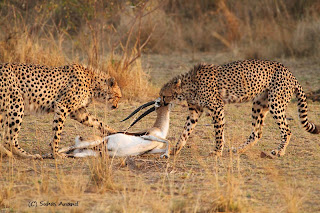 They eat quickly and warily with at least one of them keeping an eye for dangers like Hyena or Lions which could easily dislodge them from a well-deserved meal but also kill them if it comes down to a combat. 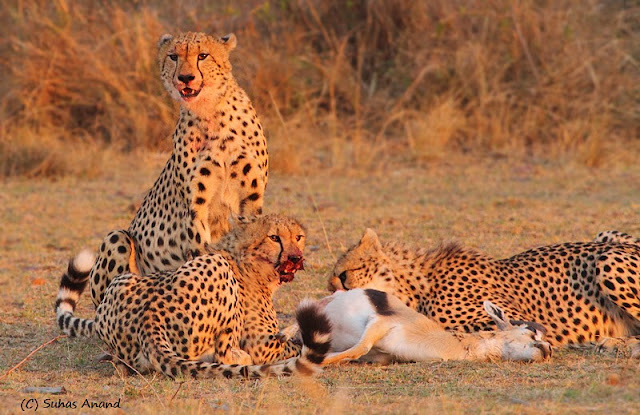 It was tough leaving Aarav and Sandhya at home in Dubai as I took my Kenya flight to Nairobi. The whole trip was in a bit of jeopardy with the arrival terminal in JKIA Nairobi having burnt down in a fire 5 days ago. Checked with Aditya Dicky Singh on latest update and he said things seem to have been resolved.
Took a 2 odd am flight from Dubai and arrived in Jomo Kenyatta early morning on time at around 630 am. Full marks to Kenya Airways and all the ground staff at JKIA to get the airport up and running so soon after the fire. I can imagine the technical and administrative challenges in ensuring a full suite of immigration and other systems linked up to servers in a makeshift tent. Even the smell of the burnt ashes was in the air as we alighted and walked over to the visa on arrival tents.  I got some good sleep for 4 odd hours and was pretty fresh on arrival. Visa and immigration was super-efficient – in fact the most efficient I remember Nairobi to be!
Outside the makeshift terminal, met up with Ken from Sunworld safaris. Chatted up with him and he knew that the KQ from Mumbai in which Dicky and team was arriving was a bit delayed. I waited in one of the open tented areas reading a Wilbur Smith and enjoying the amazing Nairobi morning – a cool 18 degs.
Once the gang from India arrived, we all got into our respective landcruisers after getting local SIM cards. The hardiness of the landys were to be tested to the brim during the week – especially the last day when we were caught sliding across the cotton soil of Mara in a thunder storm.
We took off towards Nairobi CBD and then off to rift valley and Narok. Took the usual break at the top, before descending into the valley and first timers to Mara got the first glimpse of the magic land from afar. Stopped at Narok to have lunch at around 2 and we all inaugurated the first of many Tusker “cheers”. Tusker is my favorite lager and probably one of the best kept secrets of Kenya! More than the Nairobi weather, traffic, rift valley view it is the Tusker at Narok for first lunch enroute to Mara that gets me to the Mara mood! That’s also when it finally sinks that I’m back in Mara for sure – no more worries on missing flights, getting bumped off flights, losing luggage, forgetting lens or camera bodies and all other such fears that I have before every  Africa shooting trip.
Drove right through Mara into our camp. This year we were tenting in Matira Bush Camp, in central Mara, close to both Mara and Talek rivers. It was a nice wooded area where we could listen to Hyenas through the nights and a male Lion that starts roaring at around 430 am – pretty early riser! Waking up to the sounds of hyenas and lions – that is something which I always look forward to in the bushes.
We were there for a week – tents were good, bucket showers were nice, food was ok, cold Tuskers were plenty, charging points worked, no dangerous encounters of any sort – overall a pretty good homecoming into the bush for us city dwellers! We knew that crossings had started pretty early and hence might miss on seeing wildebeest crossings at the Mara. I was quite ok with that since I had all required images of crossings from the summer of 2011. This year my focus was predator action and as usual Mara over delivered! From a photography perspective, as usual for Africa, I just had two bodies and 17-40 and 100-400, apart from a 50 mm prime. Most of the equipment worked without mishaps but for the 40 D which gave err99 two days making my heart skip a beat. Also the Sandisk 16 GBs did miss reading few shots during RAW bursts (even while buffer was not full) while the cheaper Transcend worked like a dream. Thing to keep in mind for future.
We did get some rains during the night and a wonderful thunderstorm the last evening during our drive back. That for me was one of the most beautiful evenings in memory with the land cruiser sliding and bursting through the incessant water curtain including 3-4 360 degree spins throwing us around. We had just seen a Leopard mom and her two cute cubs and the throwing around increased the adrenaline rush even further. The trip overall was one of my best ever and the best to Mara. Could not have asked for more as the write up below and the images with it would testify.


Predators were the focus and hence Ill share some predator stories than a full-fledged trip report.  Starting with Cheetahs, then Lions, then leopards and finally others.
Posted by Suhas Anand at 5:10 AM No comments: