I had always been fascinated by rains..and tigers ! So when a chance presented itself to photograph the two together I latched on to it. I joined my friend Nimish who was travelling from London combining Ranthambhore and bike trip to Ladakh. As usual, we decided to stay with Dicky and Poonam at Ranthambhore bagh. There is no place like it in Ranthambhore and it feels like home than a lodge - interesting also to share days events and photo tips with co-photographers. Most visitors are wildlife lovers, conservationists and photographers - so the kind of people I absolutely love hanging out with. Invariably you end up making more friends.

Took Emirates from Dubai to Delhi which landed at an odd hour of around 2-3 am. Since Nimish's Qatar Airways from London was also landing around same time, we caught up at the airport and took a pre-paid taxi to Nizamuddin railway station. We had to wait till around 8 am for our train to Sawai Madhopur. It was the worst 3 hours of the trip in what is clearly one of the filthiest major stations of India. For the life of me, I can't fathom why the government would not want to clean up such a major railway station - used by both tourists and residents alike. Swach Bharat could do well to start from here. We sat at the AC waiting room - which potentially is the cleanest area to "relax" ; it still had rats, wrappers and people sleeping all over. Bathrooms were ofcourse bad but compared to the filth outside, it was relatively well kept ! People would come and wake us up to keep watch over their bags so they could use the loo or brush teeth which I found quite amusing.
Thankfully the train was not delayed and we reached Sawai station without much fuss.

We were driven to Bagh in their open top jeep - it felt amazing to sit in the gypsy after almost a year taking in the new sights of Ranthambhore. Almost felt the number of hotels are increasing exponentially year after year. We had Rajinder as our guide for the full trip - nowadays, you cannot fix your jeep and driver for entire trip length and it keeps changing by trip (You could fix vehicle by paying an exorbitant 4000 rupees per trip). I personally prefer to have both guide and driver same for full trip because you kind of develop kinship and an understanding of which angles, light and subjects I prefer shooting. Anyways with the experience of Rajinder in the jeep, we were quite OK.  Having a row to yourself in the jeep is important for serious photography since that helps you cover all angles even while using long lens without disturbing others.

I was expecting temperatures upwards of 40 being peak summer - but the early rains had meant it was a more manageable 34. It also meant the red dust which is a big bummer for photographers was a non issue. However, it also meant few tiger sightings. You could ofcourse enjoy the newly sprouting green shoots, and the photographs did have a rainy feel to it, especially in mornings - something which I was eagerly looking forward to. Most nights, it rained and that meant the prey animals like Sambar left the lakes for higher grounds. That also meant most tigers followed to higher ground and we never really quite saw them to our heart's content.

The season's stars were T-19 (machali's daughter and current queen of lakes) and her litter - we never saw them together though we saw T-19. We also did see their dad - T28 or the star male. And a male leopard in Zone 4. Birding as also good through the week as was time lapse shooting I was doing to create a 3 minute multi format clip. I wanted to shoot the monsoons hitting and on our last drive we had this amazing storm clouds gathered in zone 3 with prospect of T28 walking out of the hunting lodge where he had gone in the morning. Though he did not come out, I could shoot some amazing timelapses around Rajbagh and Padam Talao with the clouds gathering and then bursting into a torrential downpour. It was beauty, peace and excitement combined into one heady cocktail ! Though we spent considerable time at Zone 3 in anticipation of tiger action, it never happened. However, enjoyed to hearts content the amazing lakes, amazing birds and overall amazing feel of the monsoon forests - especially the dancing peacocks, large number of monitor lizards, Indian hare, osprey etc.

Here are a few of my favourites 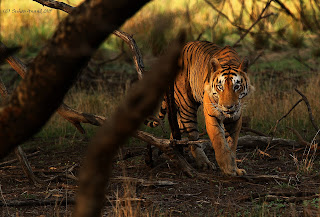 One of the earliest safaris, we had Zone 4. After an uneventful morning and larger part of evening safari, we met queen of lakes T-19. Since there were many gypsies following her and shooting would have been average, we decided to track the cubs. As we were doing so, we saw the father T-28 walking towards the grass lands next to Mallik Talao - one of the male cubs was resting amongst the grasses. We were looking forward to some dad-son love - however, the cub ran away as soon as it got the whiff of the large male. We however got a nice shot of the star male lighted by a setting sun - just his visage lighted up. 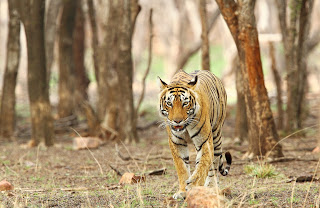 We had the good fortune of T-19 walking direct to us one evening - most probably looking for the cubs since we could hear her late in the evening moving up the hill roaring loud for the cubs. We found out latter that she had made a kill in the hills and was probably wanting to lead the cubs towards the food. That also meant she was not sighted again till parks closed - most probably she took the cubs in the night up the hill towards the kill. 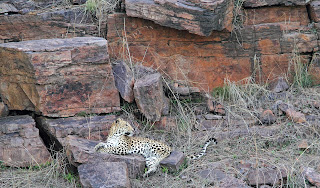 One evening, as we were tracking T-19 family we saw them resting far away in a gorge, the cubs being partially visible. That is when, across from our position, on the far bank, amongst the rocks we sighted this beautiful male leopard. Must have been one brave fellow to be walking the grounds with a tiger family relatively close by. Typically if they even get a whiff of tiger, they run up trees to avoid being targeted. 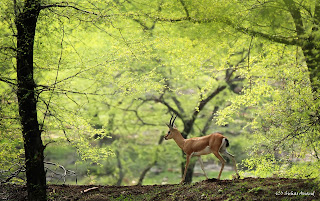 Chinkaras have become very rare in Ranthambhore - so one morning when we saw a gang, we decided to wait to enjoy them grazing the new life brought along by the rains. I got this ethereal shot as one of them walked up a bank surrounded by new leaves all around and a rising sun reflecting off the leaves. I would have loved to frame the tree on right better for a full natural frame but you don't get everything always right especially when you shoot with long primes ! 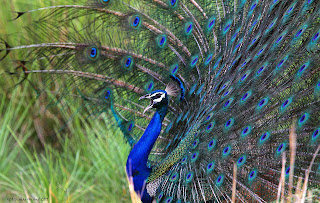 Given the onset of rainy season, I was expecting to shoot dancing peacocks - issue was always what can you add as a photographer to one of the most beautiful spectacles. I wanted to keep the head still and sharp and get a blurred feather effect using slow shutter speed. After many trial and error , finally got something relatively better. 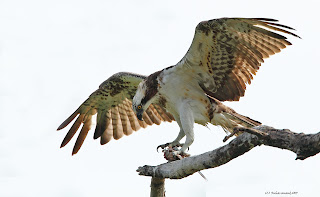 Osprey eating fish - had never seen this bird in any of my trips to Ranthambhore and hence was nice to see it going about its lunch !

It is always nice to see a forest that is lush green - since I have always been in late winter or summer to Ranthambhore I never got this lush green feel for the forests. This was such an eye pleasing view from the top most point in the park with the clouds coming in. Most of my timelapse work was done from around this part and the lakes. 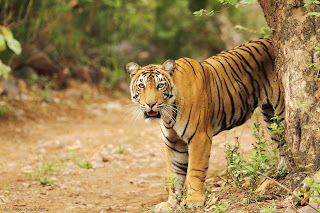 As a sweltering morning drive in z 2 was coming to an end without much happening, we took a bend and suddenly from nowwhere this lady appeared for 2-3 seconds and vanished like a ghost ! No clue where she came from and where she went - also no one has a clue who she is which is not saying much since there are many tigers in the non tourist zones that tourists typically do not see often. This was one special sighting !!


A bunch of other interesting images made during the trip 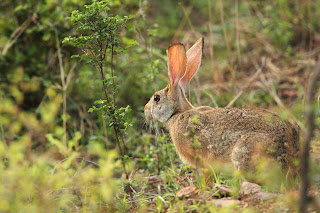 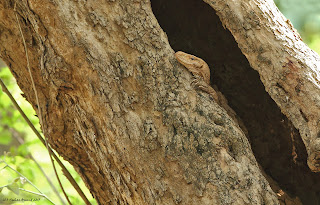 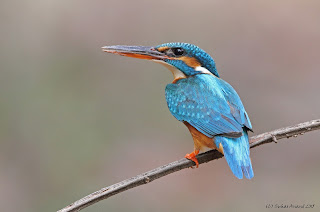 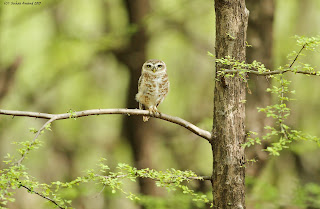 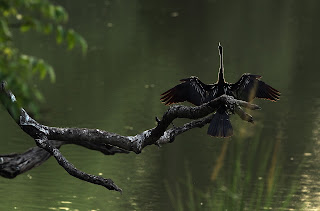 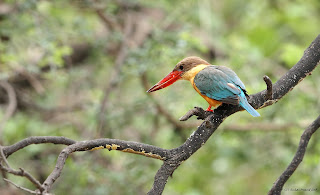 Posted by Suhas Anand at 6:21 AM No comments:

Boston is the city Ive been to the most in the US. This time when I got a chance to revisit the city, I decided to move around and use my new phone camera to do some photography. Mostly I chose to stick to the famour tourist trail - the freedom trail of course but also moving to seaport boulevard, USS constitution and taking the boat from charlestown at navy yard back to down-town. Would say best 3 dollars spent !

This was also the time I realised that the newer phone cameras, especially the one I was using, the Iphone 6, has evolved to such and extent that they can be used as a travel snapshot tool, almost producing quality that matches an entry level camera in good light conditions.
Some of my favourite travel snapshots from the trip are below 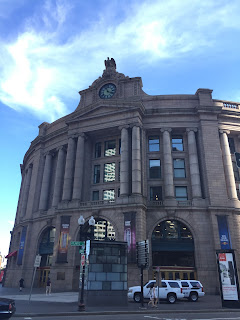 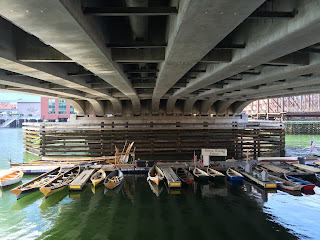 Close to seaport boulevard at the water front - interesting set of lines, colors, shadows and reflections made this one of my favorites from the trip 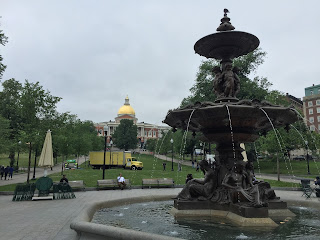 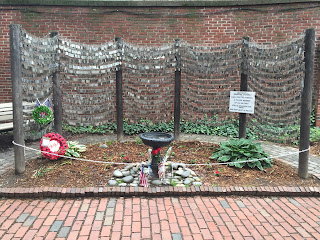 Melancholic place - dog tag memorial for all dogs that fell during the Iraq and Afghan operations by US Military - as wind blows you can hear them chime. 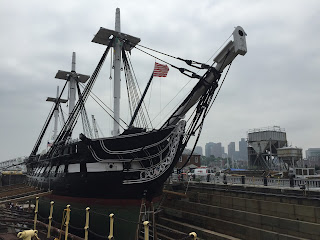 Close to the USS constitution museum in the freedom trail 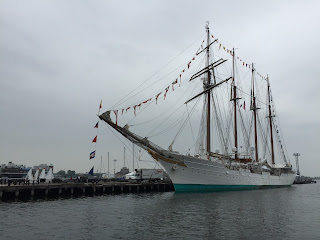 A good-looking vessel at the harbor - USS constitution 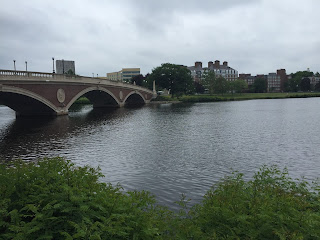 One of the multiple Charles river crossing close to Harvard campus 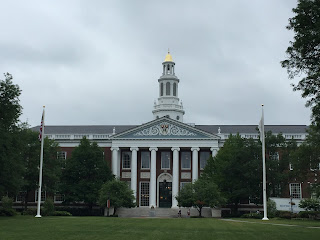 The legendary Harvard business school
Posted by Suhas Anand at 5:11 AM No comments: