I've kind of had more of Kerala than I'd have ever expected. Or anticipated. Thanks to a passport renewal process which underwent full blown Murphy's law (All that can go wrong will go wrong!) I've been in Kerala now for almost a month. This is the longest yet I've stayed with my parents continuosly since I was 18 and went off for my undergrad engineering. Looking back, it was a fantastic time - great food, enjoying the almost unabated Kerala rains from our porch having hot tea and bhajji (The Kerala variety which is made of raw bananas fried in some great tasting dough) and planning some great bird shoots. I might soon get my new passport finally. Though I'm pissed off and frustrated currently about the who episode, looking back a year from now, I'd probably be glad of the forced break !
The project on which I spent considerable time at home was shooting sunbirds. I've always wanted to photograph those tiny few cm long birds flitting from flower to flower. Approaching them on foot had never ever given me even one decent shot. After studying their habits for couple of days, I created a make shift hide using some brown/green cloths and mother's bunch of sarees of similar color. (Since it's long since Ive spent time with them, they were prone to turn a blind eye to my crazy acts!). After around 20 hours of shooting spread across around a week, I finally nailed some great ones. Used 100-400 on Canon 40 D with very high ISOs of 800 odd given the cloudy weather and continuos rains. (Have used noise reduction software to reduce some effects of the high ISOs) The overcast conditions did help to preserve the color shades better than otherwise though. So here goes the output of the project ! 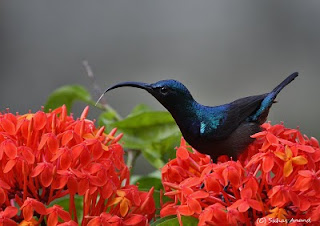 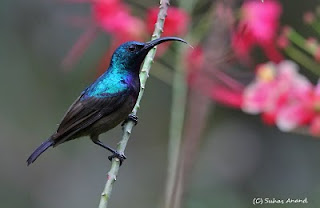 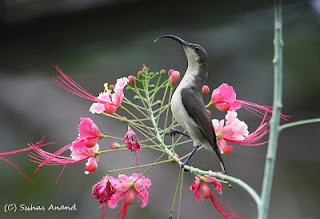 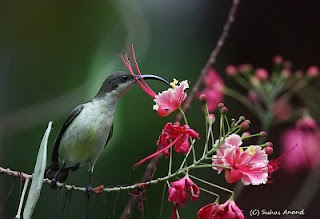 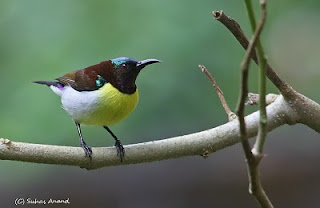 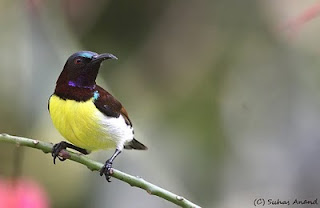 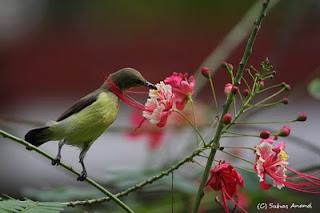 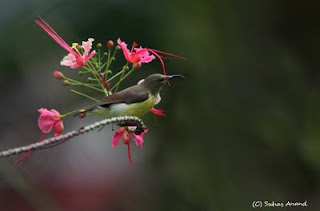