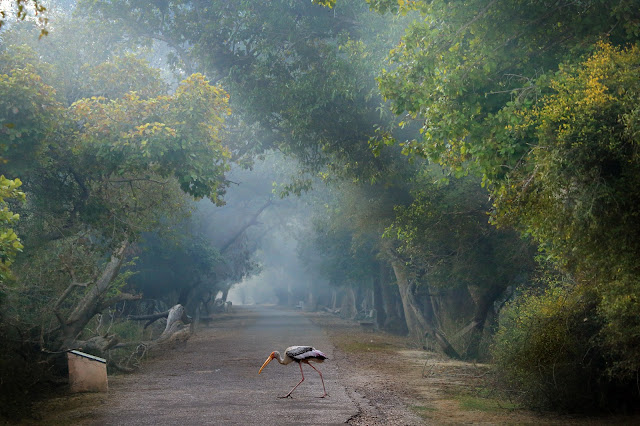 Bharatpur. It has always been a wintry dream for me. Ever since I set foot 10-12 years back for the first time on a cold January morning, this small 30 sq km national park has been one of my favorites. Many things work in its favour for me - one is the amazingly beautiful setting. Every frame here is painted by an artist creator. Two, since motorised vehicles are not allowed, the silence is immense. Ofcourse there is bird chirps all around. But for me its noiselessness. Three, you are free to walk around where ever you feel like. No one seems in any hurry unlike in many other national parks. You can be on your own sitting at Sapan Mori for 5 hours just enjoying all the birds going about their routine.
Last season's rains had meant the lakes were full of water. I have been there in bad years and its a forlorn melancholic place. The darters and cormorants still survive on pumped in water in the man managed lakes - but overall they are also melancholic - as if missing their international migratory friends. So I decided then that I'd go only those seasons where the water is good. Once I got intel that this year is good especially with 100s of rosy pelicans arriving along with painted storks, spoonbills and thousands of ducks / geese, I decided it was a great year to introduce Aarav to serious birding.

I don't want to make this a technical trip report as such. Most information regarding the park is available on internet and I won't be adding any value in synthesizing it here. I'll jot down some memories and some thoughts, along with the images, which I'm sure tell stories better than me.

After landing in Delhi T3 airport on a Jet Airways from Dubai, we were picked up by driver arranged by Birder's Inn, where we were staying. Enroute we decided to try some roadside dhaba food along with tea in earthen glasses. Amazing ! It also was a test for Aarav's tummy - he had no issues, for which I was immensely proud. Given that most of his vacations are going to be in the wild, he better get used to non-Dubai food standards ! We reached Birders Inn afternoon and decided to go ahead to the park in the evening without wasting any time. I just wanted to enjoy the park and decided to take only my 100-400 instead of the long lens kit. Took a rickshaw driver randomly from outside of the lodge gates. It is always a hit or miss if you don't book your guide-cum-drive ahead but since I was going to be there only for 3 days and since I knew the park I decided i'll risk it. The driver, Mannu, turned out to be quite OK- very enthusiastic, eager and fit enough to take me off the beaten tourist tracks. He also had a good network with others to get information on sightings since I was focused on Sarus and Pelican primarily for first couple of day's shoot. He also knew the names of the more common birds especially the ducks and geese, he was not as good on birds of prey and I guess I taught him a bit too. Above all he loved the Chai, the Indian version of tea with lots of milk and abundant sugar !
First day gave some simple shots - nothing I didn't have in portfolio before other than heron silhoutte on setting sun. 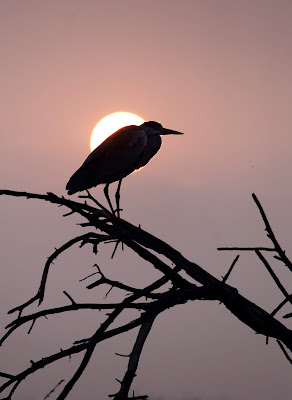 On second day, I asked Munna to come at 6. I love to be the first to enter the park since that early morning drive through the lifting mist with no one around is as close to heaven as you can get. And you might even see a jackal or deers crossing the road which is always a great photo op (the first image of this blog of the painted stork is one we got second morning with no-one around). Munna woke us up at 545 (Sandy was not mighty pleased with that, for obvious reasons). Quickly wore some winter cloths and went to the canteen to have hot chai and biscuits. Sandy and Aarav decided to join me later - both given the early start and the cold weather. I was inwardly glad since I love that lonely ride first in the park, with absolute stillness and silence around -which obviously is not a possibility if Aarav joins. I told Munna that I don't mind waiting for hours if need be but I'm going to focus on Pelicans with everything else a bonus. We did the routine spotted owlets in their roosting tree and went straight past the canteen at the end of the normal tourist road. We checked some lakes turning left post the canteen at the Keoladeo temple. Saw two pelicans in eerie morning mist. I decided to skip the usual clear portraits and instead went between bushes to create something minimalist. 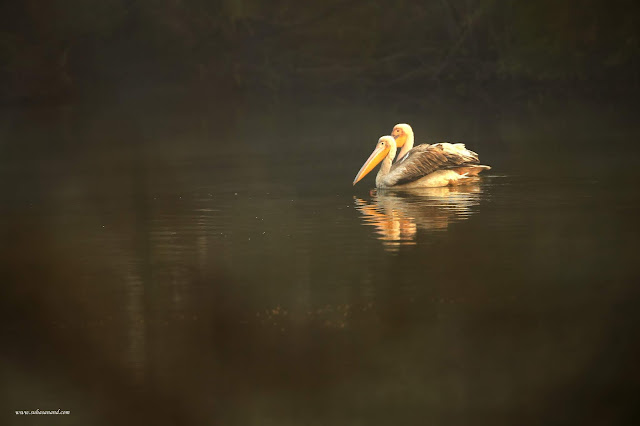 Two friends (lovers ?) enjoying some alone time together which I did not want to disturb. I just sat there between bushes (wishing no centipede or snake would be interested in me) for close to half an hour when they decided to fly away. Great start to a morning, which me and Munna celebrated with 10 rs small chai from canteen. 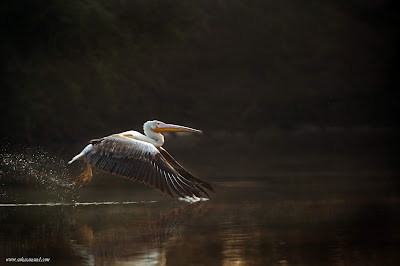 We then decided to take left post the canteen on an untarred road towards the watch tower to get a birds eye view of the bird park ! We could see Pelicans, open billed storks, egrets etc. approximately 1km into the lake but moving towards our direction slowly as they fed. We estimated it is going to take atleast an hour before they reach reasonable distance for any shooting. After taking a few pano shots, we decided to have our packed breakfast enjoying the amazing panorama in the rising sun. 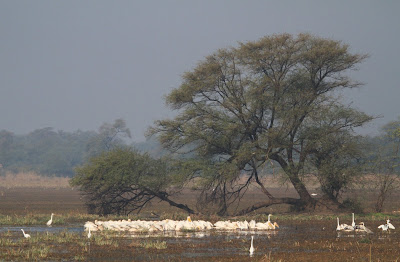 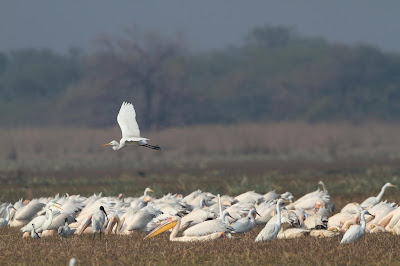 I could have sat there for ages but Sandhya called and asked to be picked up. Leaving me at Sapan Mori where I shot some darter and cormorants, Munna went to pick them. Once they were back the pelicans we guessed pelicans would have already reached close enough and hence we went back to the watch tower area. There as we had estimated, they had reached reasonably close for some interesting shots including some flights. 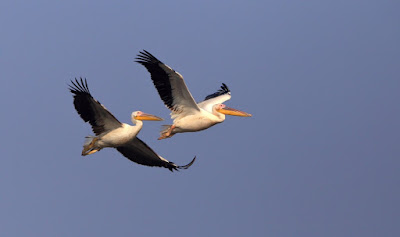 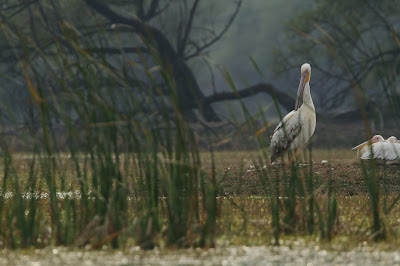 We decided to call it quits at lunch time. Went back to room, backed up the files, put batteries on charge and had an amazing lunch. There was a big group of probably german bird watchers, who was going through the species list. Should be a nice post retirement occupation which I'll probably be doing in 20 years !

We left for the park at around 3 pm. By the time we reached Sapan Mori area, the sun had the nice golden hue as is the wont in north indian winters. It's a light to die for. I shot a few interesting frames walking around without any particular focus. Sometimes just letting nature present herself without too much planning and expectation is best - I should remind this myself whenever I'm in a tiger forest. We even got the enigmatic Sarus crane family from afar - did make some habitat shots but planned that tomorrow I'll focus on these famous birds. Sarus have a special place in my mind. Folklore has it that they mate with a single partner for life. And when one of the pair dies, the other suicides without drinking water. I'm pretty sure its a bit of a far fetched story telling but records do indicate they pair for life and do not change their partner.

Idea today was to try and spend some hours with the Sarus family. Munna and me started at 630 from the lodge after some caffeine ingestion  ! Some items of breakfast was ready so I decided that instead of packing it up Ill eat hot. That meant we missed out target of being first in park ! However, given the week day and lack of tourists, we were amongst the first. BY the time we were few kilometers inside we were the first since others stopped at owlet tree and other regular sights. As we were moving ahead we saw a jackal cross the road - almost like an apparition out of the rising mist. The kind of sighting that make Bharatpur special. I have seen and photographed the jackals the world over including Bharatpur but sights like these imprints itself in your mind.
We stood on the side of the road to see if he/she will come back. I chatted with Munna about how his dad was also a rickshaw driver for two decades and how their life is so closely linked to the park. One of the things I invariably do where ever I go is to talk to guides and drivers to understand their life's linkage to the national parks and its animals. Locals around a park are the best conservationists since their livelihood is linked to success of conservation. And that's the only way to protect what ever remains of our wilderness. The whole urban elitist idea of conserving from cities and banishing tribals / locals from buffer is so childish and you realise that only when you speak to people on the ground.

Since no jackal re-appeared, we proceeded onwards to get some sunrise shots as we had planned. KGNP is one of the most amazing places to shoot sunrises in winter since the whole place has an ethereal golden feel along with the picturesque backgrounds you get of trees in islands / water bodies


Soon we reached canteen and had a chai to warm ourselves. In the water body opposite the canteen we tried shooting cormorants and darters trying to catch fish. We also saw a small blue kingfisher pair , probably with a nest close-by, fishing and missing mostly, but being successful once !

Soon we headed to Sapan Mori and then took the right turn (left while coming from canteen side) and decided to spend the next few hours just relaxing and enjoying everything that was happening around. There were pelicans, coots, painted storks feeding babies, marsh harriers & eagles swooping down on ducks, kingfishers (small blue, pied and white breasted), hoopoes, herons, egrets, glossy ibis etc etc.


We decided to go for lunch back to lodge and on the way did the boating. Boating is typically not a great experience from a photography point of view. But that's being very parochial. Otherwise its an amazingly rewarding experience. Its almost spiritual to slowly move silently through the bushes, trees and have 100s of ducks and geese fly away at your approach. Off and on you see an open bill stork or even deers/ sambar. 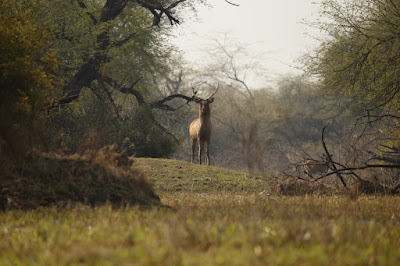 In one hour, you get a feel for a world untouched by humans - atleast its a nice fantasy to have ! 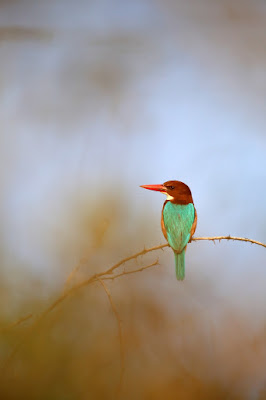 After lunch, we heard there was our Sarus family closer to road. But it was a nice 4-5 km trek turning right from Sapan Mori where rickshaws typically dont go. So lunching my tripod, 300 2.8 and 2 TC on my 7D and 100-400 on my 6D, I decided to test my stamina and muscles ! I must confess we were rewarded by some amazing time. The thing with Sarus is that you've to be quite and then they will get very accustomed to you and give you great shots. Patience is the key and we had loads in store that evening ! 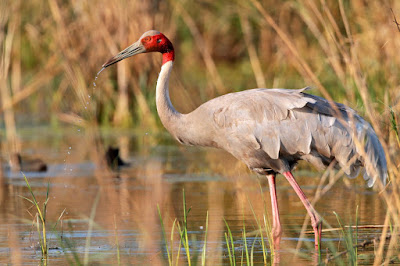 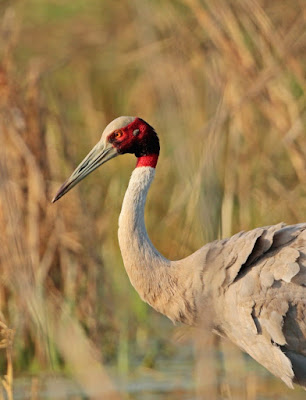 On the way back we also saw the enigmatic Bar headed geese, the longest flying birds of em all !! What a way to end another memorable time in this winter bird paradise ! 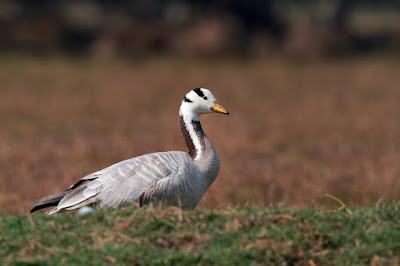