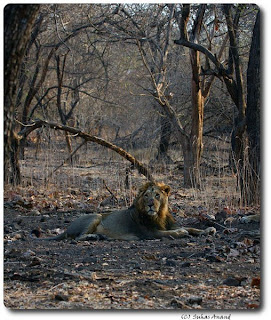 Gir was in my dreams for couple of years. When an opportunity presented in the form of hurriedly applied for and obtained leaves for me and Sandy, we decided to embark to the last abode of Asiatic Lions in the world - Gir Sanctuary (~170 km from Rajkot and 45 km from Veraval)

Had a quick chat with Yogendra bhai from INW (Our lion leader and go to person for all things Gir) and booked the ever reliable gypsie driver of his, Lalit bhai. Knowing my love to stay with locals as deep in the jungle as possible rather than in posh hotels, he arranged Chaman bhai's (One of the most hospitable individuals Ive met - imbibing all the fineries of the amazing Saurashtrian hospitality) farmhouse for our stay.

On March 31 me and wifey reached Sasan from Rajkot. Chaman bhai's farm was adjoining the gir forest where freqently leopards and lions roam freely at night. (We could hear them sometimes, never could see them in our search lights the couple of nights we gathered courage to venture out)

First safari the next morning yielded amazing results. We tracked a mating pair in route 1. And spent around 3 hours with them. The attack of the lioness on the lion before mating, the roars, the love making - these 3 hours gave us both memories of a lifetime. We could not stop thanking our stars for helping us witness such a rare and intimate moment in the life of these animals. 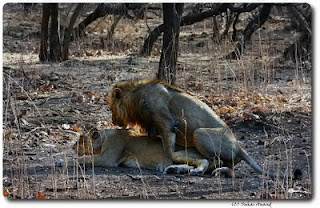 Next day was bitter sweet. While we could photograph a brother and sister (Both extremely good looking), we missed the chance of shooting 5 cubs which were sighted on another route. From our route we could see them at distance but could not go since that would have meant breaking the "route rules" at Gir (Each gypsy is supposed to stick to their assigned routes - largely this is followed to the word!) 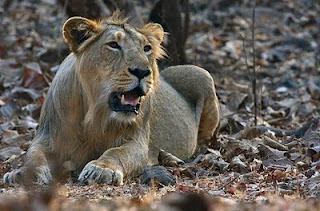 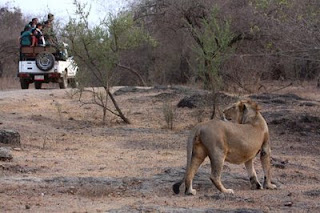 Afternoon was again spent with the mating couple observing them spar at each other (Lion sustained a huge gash in his face). Post mating (Which this time they did behind bushes) they came out in open road and sat resting. We could observe them for an hour from as close as 15 feet. Could almost feel their breath on our body and it did send a tremble down our spines. There is nothing bigger an adrenaline rush than looking eye to eye with a male full grown Lion at 10-15 feet. It is like 500 sky diving and 1000 bungee all rolled into one ! 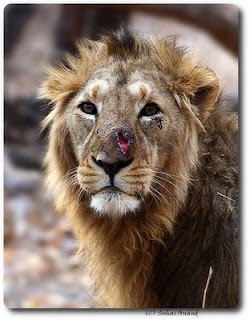 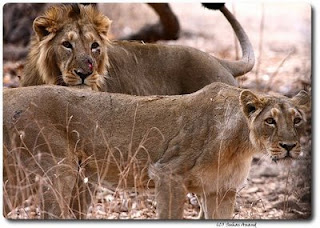 Third day morning was on route 2. 2 and 6 are the routes which is allocated to most local tourists and hence pretty busy ones- also more noisy especially if there are rather clamorous kids in some jeeps. The morning was spent with just a single lioness sighting deep in the bushes for any good photo ops.

Went back to Chaman bhai's farm for lunch and the usual bucket of chaas (buttermilk). Took a break to download pics, process a few of them, check internet for sometime and catch up on some sleep. At 3.30 sharp we started off in Lalit bhai's gypsy for the safari. Nothing happened till around 6. We did shoot a few birds like common kingfisher, tickells blue, green pigeon etc. While on the way back we saw a gypsy full of students waiting across a water hole. We waited there along with them. After about 10 minutes a lioness appeared across the hill - slowly walking down to the waterhole behind bushes. Then we saw her brother appear lazily ambling across. They gave a brush to each other and came towards us. Passing us in front they started walking along the road. After 10 minutes, the male decided to rest right on the road in full view - that too in super golden light falling on his beautiful full maned face. At that moment, he could very well compete with the most handsome tiget Ive photographed as the most beautiful thing Ive ever shot. 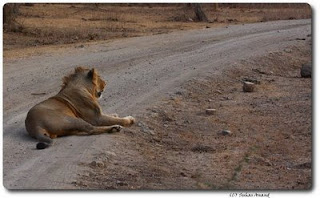 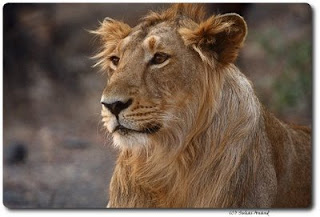 As wife shot the video in her panasonic, I took 2 GB worth of memorable snaps. We had to leave them as the time was almost 6.30. Going back to Chaman bhai's farm we discussed the day and plans for next day with Lalit bhai. Went to the field to take bath under the water pump and then off to the machan to lie down under the sky in the field with mind full of happiness. Got down to have a sumptuous dinner and chaas as ever !! :)

The last day again proved to be unfruitful for photography as there were no lion sightings - nor any great birding opportunity. However, we saw fleeting glimpses of Jackal and two leopards - one in each safari. It was my first leopard sighting. That day morning Lalit bhai had told - today we should aim to shoot leopard. His words came close to being true twice - we saw it twice but could not photograph either time as it was too fast between the bushes for a good shot. Anyways, I was more than happy since in all the time spent in the Indian and African wilderness, I had not once spotted the beautiful leopard let alone photograph one.

As the trip came to a close, we were really sad to leave Gir - both the lions and it's amazing people, especially Lalit and Chamn bhai who were like close relatives all through the week. We caught up with "Dhamal" a performance by the small african community which thrives in the Gir forest - little known to the outside world. 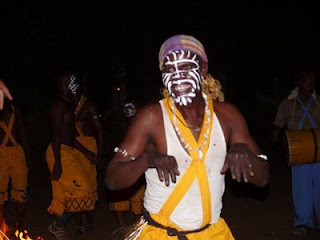 As we went to Rajkot for onward trip to Mumbai and it's daily chores we were wondering when would the next opportunity be that we can be back with the kings of Gir forest and the love and hospitality of Chaman bhai and gang !!

1. The road from Rajkot to Junagadh is real ossum. Junagadh to Sasan is not bad either.
2. If you are taking bus, ensure you take a GSRTC express from Rajkot to Sasan. That will save you more than an hour - it becomes a tiring and sometimes irritating journey in a non-express.
3. If you are coming by train, see if you can take a ticket to Veraval and travel back to GIr (45 km from veraval) rather than from Rajkot (160+ km from Gir)
4. Book a nice place to stay. If you are adventurous, I suggest farm houses as close to the forest as possible. You can then walk along with experienced locals at night to search for some lions ! (Or just walk in that hope - it is indeed quite thrilling and you probably are happier when you fail in the endevour). If you love local life, local food, local folklore and lots of great hospitality head to Chaman bhais !! Else you also have airconditioned swimming pooled hotels galore.
5. Get a good driver (If you are a photographer) who can maximise your sighting by collecting local intelligence regarding animal movements.
6. Tip the guides and the driver - they work overtime to get you to see and photograph your subjects. ANything from 50-150 over and above the stipulated guide fees is fine.
7. There are no ATMs of any bank. Pay in advance or check if they can accept credit card/cheques.
8. Alcohol is officially prohibited ;)
9.Understand and accept that inspite of best efforts, the guides / drivers can't make a lion appear for you ! However, in summer months 2-3 safaris should yield atleast one sighting. And in winter 5-6 should yield atleast one.

Lastly just feel blessed - you just went to the last remaining abode of the Asiatic lions. Truly the king of the jungles in these parts of the world. Lets all do whatever we can to ensure this population grows for generations to come.
Posted by Suhas Anand at 5:42 AM 8 comments: 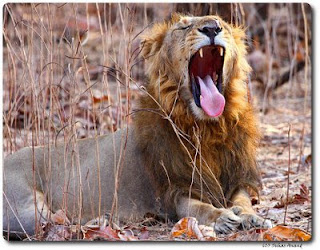 Me and Sandhya have taken a break (finally) of a week to track and photograph the remaining Asiatic lions in their final frontier Gir in Saurashtra, Gujarat. We are staying at a local farmer's house here in the forest. Sleeping at the machan in the field open to the stars, hearing the roar of lions close by, bathing under the pump in the fields and drinking bucket fulls of chaas whenever we are not photographing in the jungles..
Detailed report and pics soon...
Posted by Suhas Anand at 12:40 AM 2 comments: