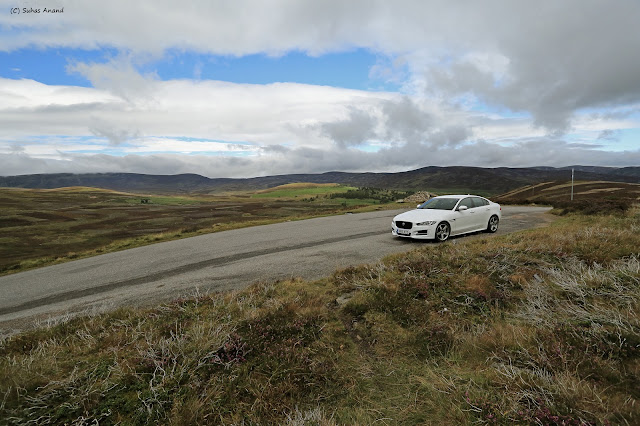 Last year,at the fag end of Summer, while we were vacationing in London, we had done Edinburgh-Sterling and went up till the Loch Lamond national park - which was fascinating ofcourse, but too short. (Read that here) However, what it did was to pique our curiosity regarding a longer road in Scotland. At the time we did not know the Scottish bug had bit us so bad that we would be back within a year.

Fast forward, September 2015, we decided to go on a 9 day road trip in Scotland. Idea was to fly into Edinburgh, cover the Eastern coast, go up north cutting cross the Cairngorm national park, touch isle of Skye and come back via Pitlochry into Edinburgh. Fly back to Dubai from there. Since I was speaking at a conference in Aberdeen, it fitted quite well. Also it was Eid holidays in UAE and hence the number of leaves to be taken was also quite manageable. Only challenge was how Aarav at 2.5 years would cope with the long drives. Though he loves outdoors almost as much as we do, being on a car seat would get boring in a while. Hence we planned enough pit stops to give him time to run around and enjoy. There honestly, is no better way to see the Scottish highlands other than driving yourself - assuming you love driving as much as I do.

Took Etihad from Abu Dhabi given that it was almost at 60% the cost of Emirates. One hour drive from Dubai to Abu Dhabi and within no time we were in the Etihad flight to Edinburgh. It was overnight red eye flight but I had to sleep given the amount of driving I had to do once we land. Got some thankfully. Landed in Edinburgh to fantastic sunny morning with temperature at a very pleasant 15 degrees. After some coffee and sandwiches, went straight to the connecting walkway which takes one to the car rental lobby just outside of the airport.

Took our pre-booked car - the new Jag XE Sport. A fantastic white diesel car with great handling and planted drive. Ofcourse with the British pedigree ! I'd have preferred a defender or range rover but then we would have been left with no money to fill petrol/diesel ! The white feline would be our companion for many miles over the next 9 days.

We had booked a B&B with a check in time of 4 pm in Stonehaven, a 120 mile drive. Stonehaven is a nice beach town situated in Aberdeenshire. Since we had plenty of time, we had decided to do a bunch of castles enroute. Stonehaven itself was picked due to proximity to Dunnottar castle, which was one of the places I wanted to do some photography around. However, we took a pitstop at a beautiful lakeside garden in Brechin and then decided to drive straight to Stonehaven. After dropping Aarav and Sandy at B&B I decided to trek up the castle areas for photography in the setting sun. 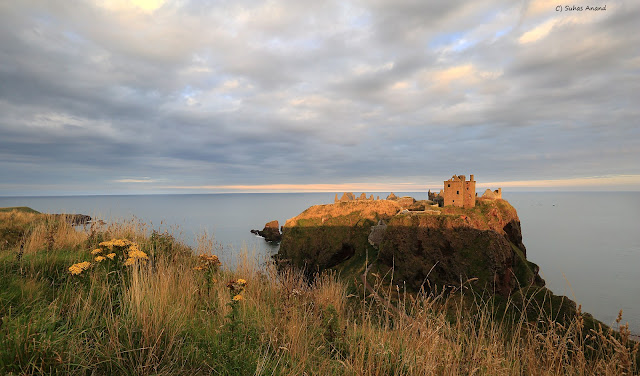 Also covered the Stonehaven war memorial which was a couple of miles from the castle. The straight walkway to the war memorial (On right in the picture below) proved to be very photogenic. 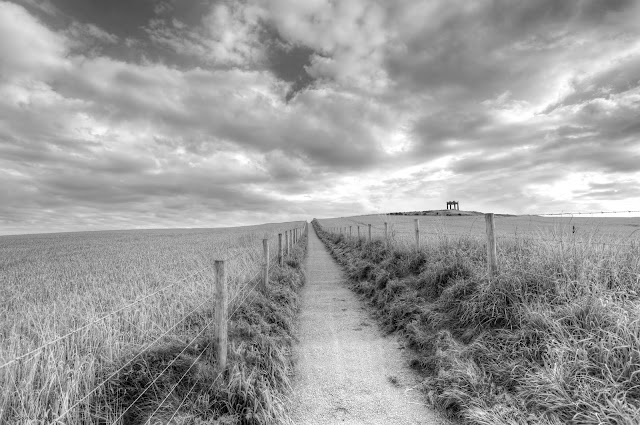 Next day morning, all three of us decided to go out for an early morning drive. Idea was to see the sunrise over the Stonehaven beach. It was a bit cold early in
the morning at around 8 degrees. After catching the sunrise, we decided to drive to Dunnottar and take some family portraits next to it and be touristy ! Since we had missed the castles the previous day, we decided to dedicate most of today to castle tour. Since a lot of them were around Stonehaven- Ballater route, we covered Crathes, Drum and Corgaff. 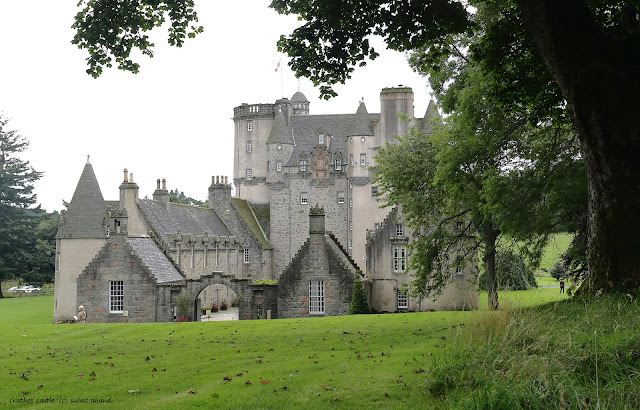 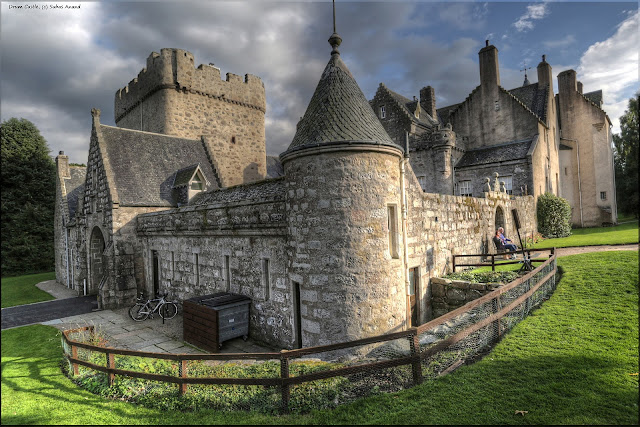 Out of these, the drive to Corgaff via Tomintoul was amongst the best I've driven anywhere in the world. Simply awe
inspiring vistas though the castle itself is a simple star shaped white structure. 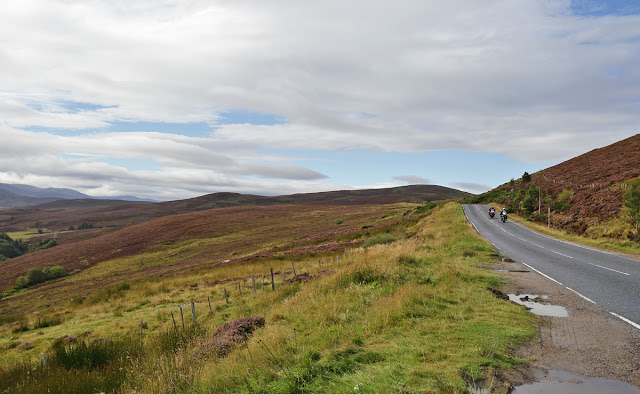 Total of around a 100 mile drive before wrapping up the day in a fascinating B&B in the royal dee side in Ballater - a little village by the river Dee where the Queen comes visiting most summers. (Her castle, the Balmoral is just a few miles from here)

Day three was dedicated to driving around the beautiful Dee side. We even managed to have some Indian lunch ! It was also Sandhya's birthday and hence we decided to celebrate it in a fashion that both of us love. Walking into a forest and relaxing while enjoying the nature. We planned to walk a simple trail in Cambus O  May forest given that we knew we will have to carry Aarav after couple of Kms. Did a short 4-5 km round trip trail and celebrated the birthday ! We did another recce of Tomintoul up the mountains followed by relaxing next to river Dee in a caravan park late in the evening.

Next day we would cover quite a bit of distance since we were cutting right across the Cairngorm national park. We took the Braemer (saw the Braemer castle), Tomintoul (saw Corgaff once again), Glenlivet, Aviemore, Carrbridge. We had booked couple of days in Carrbridge in the event of deciding to go see the wild life of the national park. We did see deer (red and roe) but since I was not carrying my usual wildlife kit, no good photographs to show for it. Another less than 100 mile day but some fantastic roads covered. I'd say its one of the best routes in UK - inverness, Loch Ness, Isle of Skye can ofcourse give it strong competition as we were to find out soon enough.

It was now getting colder the higher we went. The evening that we spend doing timelapse on our Iphones of a rainbow appearing at Loch Morlich was a biting 5 degrees with some strongish winds. 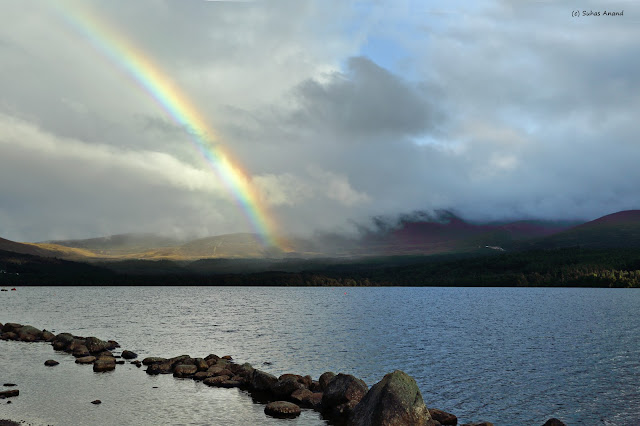 The Caledonian pine forests around is beautiful but also makes driving quite difficult especially at nights - given that there are no streetlights for most parts, a number of sharp bends and super tall trees on either side of the road, one has to be more careful than usual on the pedal.

Next day was a long drive day. Started very early after a heavy breakfast. First
pitstop was Inverness, the capital of Scottish highlands. After filling the tank to full, drove along Loch Ness to Isle of Skye route. Passed the beautiful Urquhart castle just 15 miles south west of Inverness. This was followed by the breathtaking beauty of Eilean Donan castle at Kyle of Lochalsh.
After Lochalsh its a straight road onto the bridge connecting Isle of Skye. We spent only couple of hours exploring Skye since we were planning to do a lot of shooting at Eilean Donan on the way back for sunset. As luck would have it, the whole evening was almost rained out. But it did give a shot of the castle within a rainbow. Money shot which goes on a big print in the hall ! Eilean Donan is a small tidal island where three lochs meet, Loch Duich, Loch Long and Loch Alsh, in the western Highlands of Scotland; since the castle's restoration in the early 20th Century, a footbridge has connected the island to the mainland. 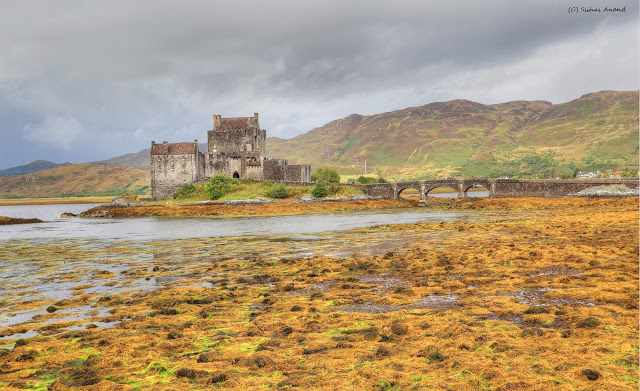 We realized we did not do justice to Western Highlands since areas around Lochalsh and Skye requires atleast couple of days. The drive from Inverness through Lochalsh into Skye would remain etched in memory as one of the best in the world. The wilderness atop the mountains is probably matched only by some stretches in Africa. (Reminded me of my drives in the Rift valley province in Narok, or the Selous / Morogoro regions)

Spent the last day at Aviemore driving to Cairngorm mountains and doing some timelapse of clouds slowly covering the mountains leading to heavy downpour. I must confess, Iphone has become an able companion to my SLRs and grudgingly I now accept that phone cameras have become usable tools ! The panorama and timelapse functions are quite useful for some nice end products - especially if one is not printing big.

The last day was a longish 150 mile drive back to Edinburgh but along the beautiful A9. However, as luck may have it, there was major traffic disruption and hence we took a deviation via a bunch of small villages around Perth - including some fascinating places like Hermitage forest in Dunkeld. Saw some of the tallest trees I've seen outside of Africa and India. As they say, everything that happens, happens for good. Though late and tired, we reached Sheraton Edinburgh in time for a warm bath after days on road followed by a proper sit down dinner with couple of Scottish lagers. 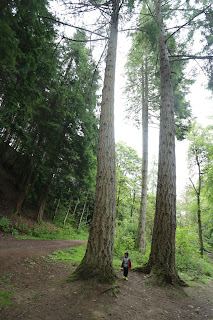 The car for most part was fantastic - I had to pay through my nose for a chip in the tire. The very low slung nature of the XE R sport meant its pretty easy to bump into grass covered side walks and scratch its underbelly too. I paid for a full Pirelli ! That was the only fly in the ointment of an otherwise impressive experience with the car (Well mistake was mine, so can't complain!) 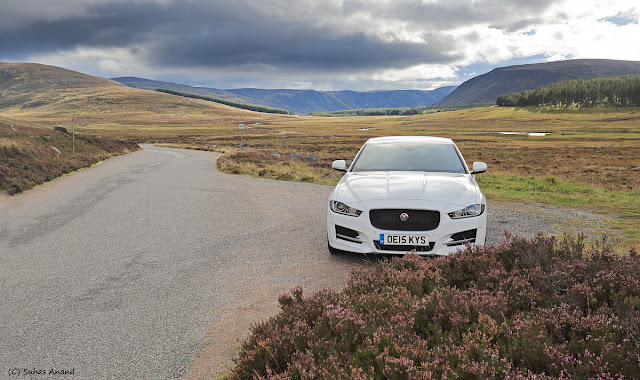 Posted by Suhas Anand at 8:23 AM No comments: