The Epic of Mara

Masai Mara. The mottled plains of South-western Kenya watered by Mara and Talek rivers. Abode to the Maasai warriors. The savannahs that many believe is the cradle of mankind – making him climb down as primates from trees due to the conversion of the rainforest into grasslands. Driving the homo sapiens to walk on two limbs, develop tools to escape from ground predators and finally start agriculture.
The legend of modern Mara is it's eminence as the 8th wonder of the world. Home to multitude of animals, birds and trees. Home to the wildebeest migration across the greater mara conservancy and the Serengetti plains of Tanzania. I had never been to the Kenyan side of this vast wilderness and was very much looking forward to the same.
As the flight touched down at Nairobi we met up with co-wildlife photographers Paul McDougall from UK and Dicky & Poonam from India. After the usual round of tuskers and bush stories we were on our way to the plains across the rift valley. I was a little skeptical if Sandy is going to live through the stark nylon tented camp-in-the middle of -lion territory without running water or electricity. As it turned out, it all went like a dream !
On the way, I was wondering – What makes Mara so legendary? Who is the hero of Mara's drama? Is it large super prides of lions like the Serena pride or the Marsh pride? Is it the famous cheetah families like the Honey’s boys or the Three brothers? Is it the unfortunately fast disappearing Rhinos? Is it the stealthy Leopards with their Impala kills up the trees? Or is it the herds of Elephants sashaying across the savannahs without a care in the world ? Over the next 8 days, I’d get my answer. And the answer would humble me.
Over a million wildebeest, and half a million zebra and antelope migrate from the Masai Mara all the way to the Serengeti ecosystem. It is a perilous trek with crocodiles lurking at river crossings, predators such as lions, cheetahs and leopards a constant threat – and yet it takes place every year, year after year. 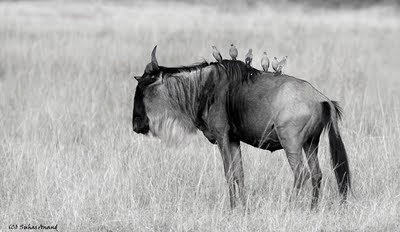 One should go across the plains into Tanzania to search for the origin of the legendary migration. In the plains of Ndutu in greater Serengetti ecosystem, come February, over 500,000 pregnant mothers give birth to their next generation. Half of them would be eaten up by predators or otherwise dead in months. Those that survives join their mothers, fathers, Zebra uncles/aunts and begin their quest for food across the Mara.
By May/June the plans of Mara gets watered by the long rains, providing enough grass for the oncoming visitors. They reach the plains by July and August completing one half of the cycle. By October/November, the herd is ready to go back the same route into the Serengetti for the next calving season and welcoming a new generation to join in this massive cycle of birth, death and regeneration.
Journey and life inherently becomes one for over a million. They fight, drink, play, run, nurse, have sex – all during the course of this epic journey of life. 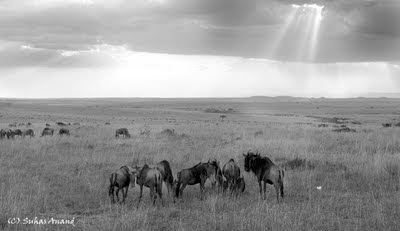 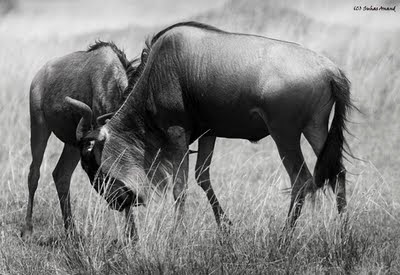 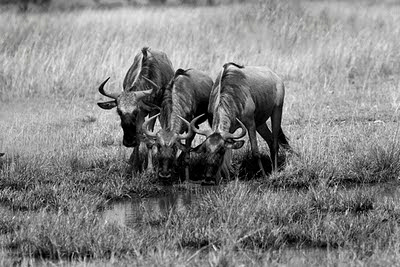 Their path is littered with hurdles that lesser willed souls will surrender abjectly to. For starters there are the cheetahs that hunt the baby wildebeests mercilessly. There are lion prides that hunt babies, mothers and fathers alike – and in 100s. Vultures feed on the carcasses and pray for their death. 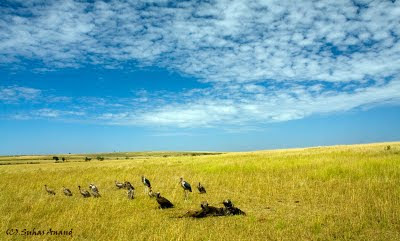 The migration reaches its crescendo as the herds cross rivers like Mara, Talek, Grumeti in their 1000s. Mothers lead the way across the rivers full of ferocious crocodiles that hunt down the weak, the young and the contemplative. Witnessing these crossings are nothing short of spiritual - the rush of adrenaline, the struggle of life, the timelessness of the event - all makes the viewer reach a transcendental stage.
Many of these wildebeests get eaten up – by the rapids of Mara or the crocodiles. Many get trampled upon by their own, in a mad frenzy that needs to be seen to be believed. Zoomed out, a wide angle gives you a determined herd, purposeful in it’s journey of life. Zoomed in, the tele portrays a different story. Eyes full of fear, babies frightened, mothers tense. One final kiss and nuzzle on one side of the river before the drama begins. It ends on the other side – with many actors not making it across. It is a most painful sight to see the bleating calfs and mothers separated from one another. Standing aloft on stone ledges beside the river, watching their loved ones brutally killed by crocs or drowning into the endless Mara. 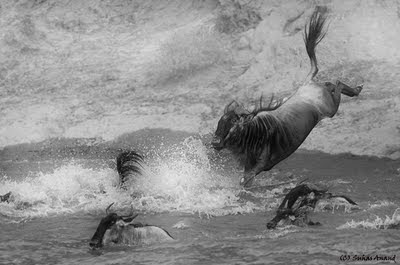 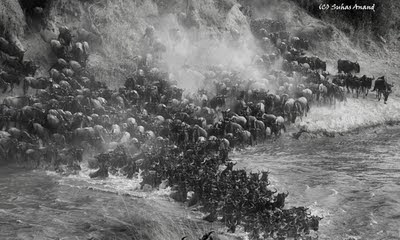 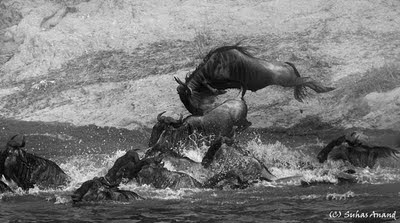 In their death they finally become one with nature’s cycle once again. Providing food for the scavengers – vultures and monitor lizards, crocs and hyenas. And soon they are forgotten by the Mara plains. Till the next season. 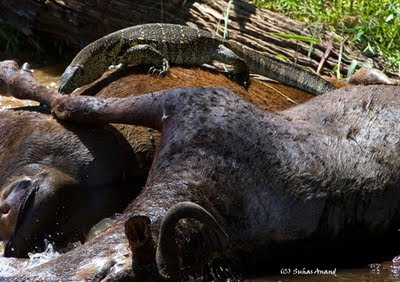 They are, for me, the true heroes of the Mara. The ones that define the lifelines of these endless plains….

When I die do not throw the meat and bones away
But pile them up; And let them tell
By their smell
What life was worth
On this earth
What love was worth
In the end – Kamala Das