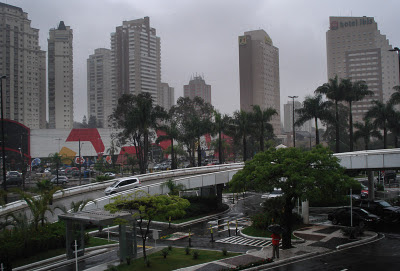 I'm in Sao Paulo or Sampa for the locals. Its raining all the time thus far since I landed here in a direct EK fight from Dubai, clearly the longest haul I've done without stoppage. One cannot help wonder the efficiency of modern jet engines doing over 16 hours straight with no refuel. The temperature is temperate due to the elevation from sea level. It has been around 16-17 throughout - cold enough to not break a sweat and cover the city on foot where ever possible and warm enough not to be wearing super warm cloths.
The initial plan was to fly into Sampa and then connect to Campo Grande to head to Mato Grosso and Pantanal in search of the Jaguar. Inclement weather and logistics put paid to that plan.
So here I'm walking the street of New York of Southern Hemisphere a bit bored and a bit excited. For starters it's an intriguing city. Lot of culture, breakneck growth, crime, traffic chaos, brilliant parks, amazing restaurants and theaters and museums. Also famed for the more seedier side with it's prives, clinicas, favelas and strip clubs. It's a hotch potch for sure where immigrants from Italy, Portugal, Japan, Korea, China, Africa etc have all settled in to make Sampa their home.
I've taken to walking the city down the famous Paulista Avenue (a bit like Oxford street in London) and Brooklin (the new financial district where I'm staying).
The Estaiada Bridge over the Pinheiros river (the bridge occupies place of pride among the new marginal pinheiros financial district) 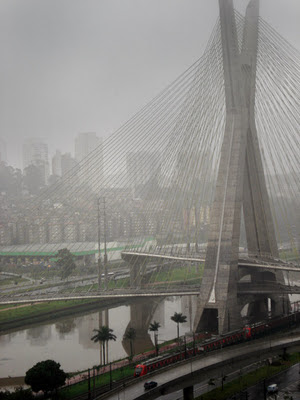 One question that pops up when one thinks of SP or Rio is safety. Once here I've realised that the whole safety question is relative. As a matter of fact so far in the areas that I've roamed, I felt more safe than even in London or Munich or even Vienna given the large number of people around even in night. I hear Rio is worse. Also downtown Sao Paulo is pretty dangerous if alone at night. But which city these days even in EU is safe when alone at night ? But I like that element of risk. Anyways Sampa is nowhere in the league of Nairobi or Dar es Salaam or Joburg. So I'm ok with the risk. I will definitely do things here that I never did in Nairobi or Joburg. There is seldom a threat to life which is omnipresent in these cities.
Will I be back ? Not to Sao Paulo per se - but I should come back for the Pantanal and then Amazon.
Posted by Suhas Anand at 2:46 PM 1 comment: